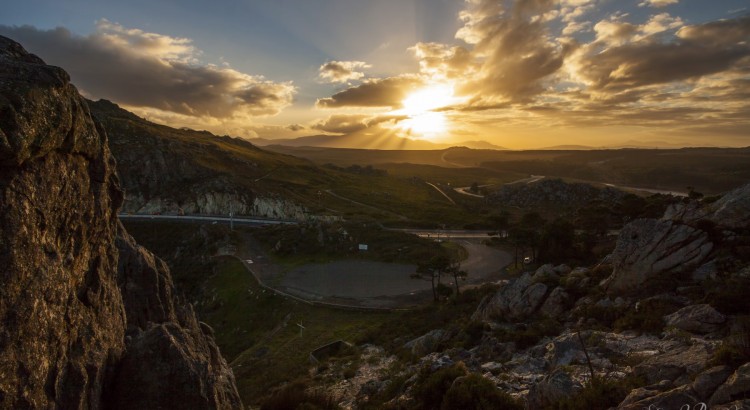 I will start this post by bringing your attention to the ‘part 1’ you see above. The reason this is a single part of a multi-part ‘series’, is because I spent almost an entire day out this Saturday and going through 3 batteries and having to empty the CF card in between – I ended up with around 50 shots for the day, entirely too many to include in a single post. So instead of doing one post of the day, I will be splitting this up into three parts, one for the Sir Lowry’s Pass mission, one for the Helderberg Nature Reserve and the final part being the Dick Dent bird outing I went on in the afternoon.

So the day started off early, I mean real early. I was up just before 5am unintentionally (I had my alarm set for 6), but I woke up at around 4:55 and wasn’t able to go back to sleep. Instead of sleeping, I dragged my laptop up from the floor and placed it on my chest- still laying in bed. I began to look for potential sunrise locations in the area, when I decided to look at Sir Lowry’s Pass. The area was not great, but the fact that it’s also a birding location with Cape Rockjumper and Victorin’s Warblers made me interested. By 5:55 I was in my car, the heater on full, wearing my winter clothes. It may still be summer, but the mornings are beginning to become cooler, and each day is losing 2 minutes of daylight time. For anyone familiar with the Sir Lowry’s Pass route, you’d know it’s not a pleasant one and renowned for being dangerous. But I am careful on the roads and with all the raptor watching I do, my peripheral vision is well exercised.

I reached the look out area at around 6:15, the sun was yet to come up- only the first hints of morning light made the sign posts visible. The sign posts which tell you that you may not feed the baboons. The location is well known for the presence of baboons and is/was often used as a ‘go to’ location to encounter them. I opened up the car door and… My god… The wind bit me straight through my winter clothes, it was gusting above 50 km/h, that brutal south easter. To make matters worse the air was icy and after taking three shots my hands were already beginning to turn numb and tingly. It wasn’t long before I ran back into my car while I waited for the sun to come up. After letting my hands defrost, I headed out again- the sun now peering over the mountains to the south east. A couple of White-Necked Ravens, a common resident in the area, passed in front of me, a silhouetted figure across the rising sun. The sunrise was quite a spectacle, there was some cumulus clouds which split the sun rays as it melted golden light over the Steenbras Dam area.

It wasn’t long before I walked to the edge, set up my tripod and began capturing some more images of the landscapes, but the lighting was all wrong. The back side of the mountain was getting lit by the morning light, while the front side where I was- remained in shadows. About 30 minutes later another car pulled into the parking bay and to my surprise the car had an SABAP magnet/sticker on the sides. I walked up and introduced myself to the man who got out, I wish I could remember his name but I’m always too busy trying to remember social etiquette that I find myself not really paying attention during the introduction.

Either way, we walked around a bit- he was apparently looking for the White Necked Ravens. I told him I had seen a couple about half an hour earlier but not again. We walked around when we heard a distinct call coming from a nearby cluster of rocks, we both ran over to see what it was- I personally I had not heard the call before so I was interested in seeing what it could be. But alas, the bird had disappeared into thin air. The gentlemen stuck around only for 15 minutes, before saying that he may freeze to death if he stays any longer. At this stage I was wearing a t-shirt, long shirt and a hooded sweater (he was in a short t-shirt).

My goal from that point was to find a better vantage point- something with more elevation. A route up some steep rocks offered a higher perch with a better view, so I threw my camera equipment on my back and began my ascent up the short incline. While the wind, the drop and the loose stones were all of reasonable concern- my main focus was on not stumbling into a troop of baboons. After reaching the highest point of the rocks, and steadying myself within them to avoid being blown down the mountain, I took some panoramic shots of the Helderberg basin (Gordon’s Bay, Strand and Somerset West). The lighting was becoming a bit better and offering some more opportunities.

In the end it was a mixed visit. I was disappointed to have only been able to see one bird properly, though it’s to be expected in that wind. But at the same time, while the lighting wasn’t working completely how I’d have wanted, I did manage to get one or two shots from an area that I had not photographed from before.

The day got far more exciting from this point, so stay tuned for Part 2 which will consist of birding at the Helderberg Nature Reserve where I spotted 4 raptors on the day.