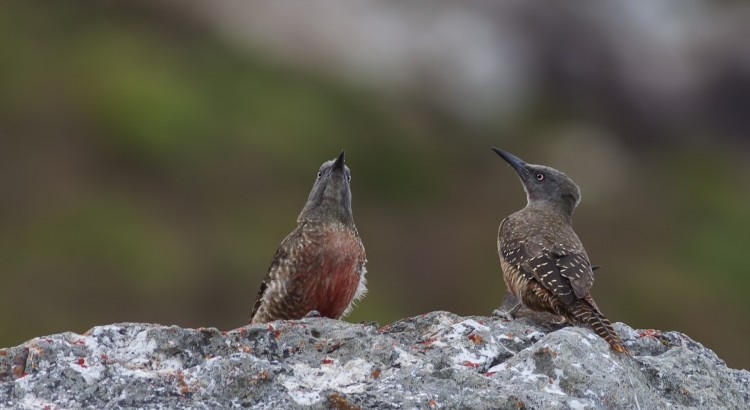 I was contacted by Trevor Hardaker this past week, letting me know that him and Margaret, his wife – would be passing through my area and heading to Rooi Els to target some birds for the challenge. They knew I still needed the Ground Woodpecker as a lifer and figured that it would be a good opportunity for me to earn a lifer tick, while they hoped to achieve some new ticks for their challenge list. I would also attempt to show them the African Wood Owl which they still needed.

I left the house at 7:15 to get to the mall, where they would be picking me up from at 7:30 – though I ended up taking a bit of a detour, to capture an image of the sky, as it was a rather amazing sunrise. After meeting up at around 7:35, we quickly made our way to Rooi Els. The weather at the mall was good, but as soon as we approached Gordon’s Bay, the wind was gale force and we began to worry about our chances for success. The targets for Trevor and Margaret were the Cape Rock Thrush, Ground Woodpecker, Red Chested Flufftail and Burchell’s Coucal.

When we arrived at Rooi Els the wind was still pumping, but we stopped off on the side of the road just before entering the town, if one can call it that… And did a quick search for the Coucal. Despite braving the cold winds, we were unable to have any luck. But it was always a bit of a long shot. It was then on towards the area of the Thrush, Rockjumper and Woodpeckers. Directly after parking the first bird we came across was a Cape Bunting. There were various other members partaking in the challenge who had recently had success with both the Rockjumper and the Ground Woodpecker. But we spent nearly half an hour walking and scanning before Margaret finally got some visuals on a couple of Ground Woodpeckers on a distant rock. We edged towards them and began the climb up the mountain foot, managing to get close enough for photographic opportunities. This was a lifer for me, and a bird that I had struggled to get – having been to Rooi Els a few times prior in an attempt to tick them. They’re also beautiful birds! While watching the two birds, we were further entertained when another 2 individuals joined them. We continued on looking for both the Cape Rockjumper and Cape Rock Thrush. It wasn’t too long, but not without a lot of effort before we eventually came across the Cape Rockjumper. A single male individual far up the mountain slope, the views weren’t great but it was enough for me to tick it for the challenge. 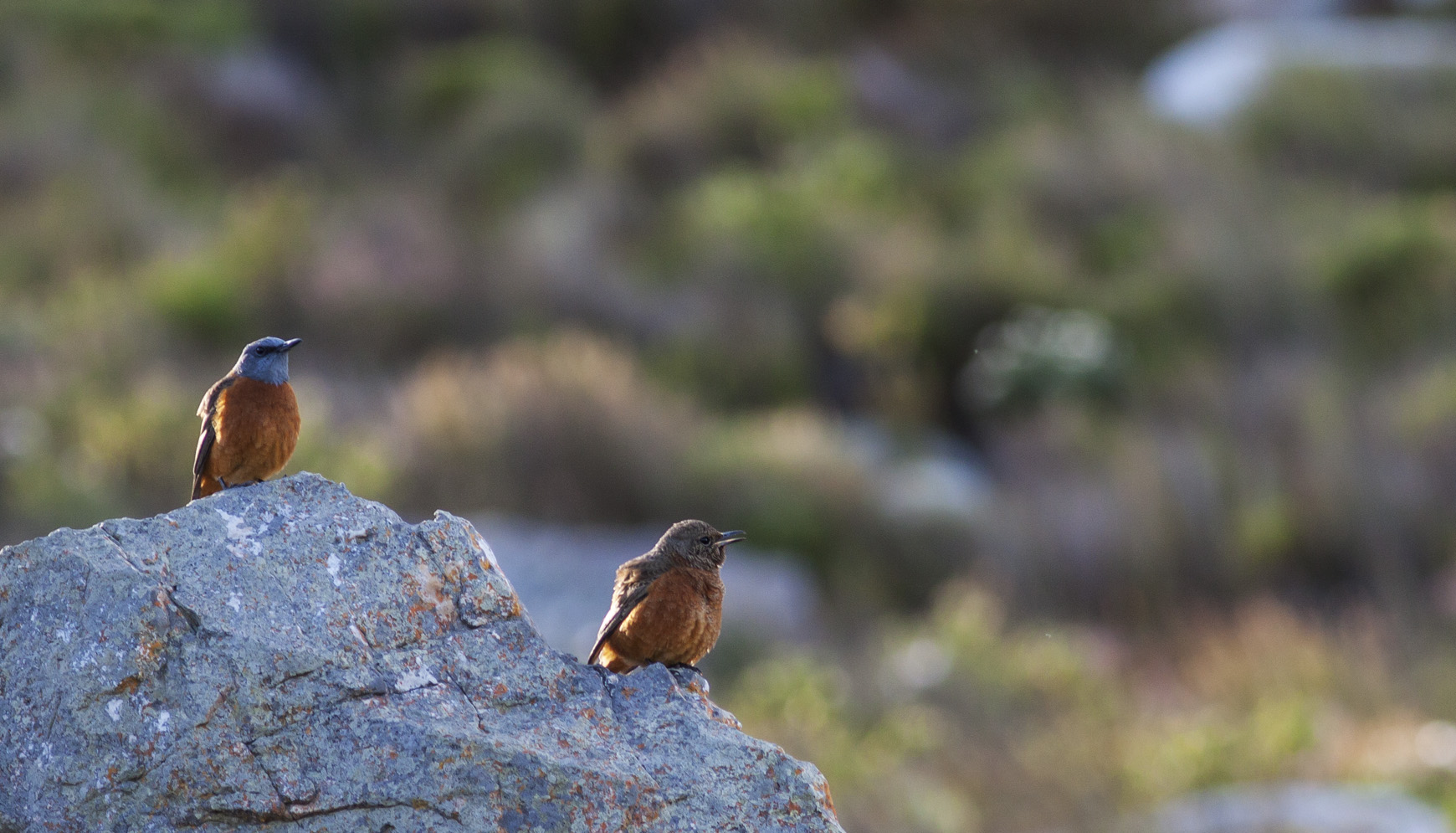 The Rock Thrushes were proving difficult and we found ourselves struggling. We headed back towards the car, and just then a single bird was seen on the telephone pole in front of us. We began taking some shots, and trying to get around the light. The bird was then joined with another, and we had both a male and female moving between the rocks and the telephone pole. They gave us good views, and we were in turn able to get a complete set for the area. Hitting all our targets. Further on we were also entertained to some great views of a female Cape Rockjumper who was displaying with utter dedication. Flaring her tail and hopping around between rocks. She came quite close and offered me the best views I’ve had of a Cape Rockjumper. After getting back to the car, we took a few minutes to catch a breather before heading off. Having seen Cape Gannet pass just offshore in the past, and me still not having one for the 2014 Wider Cape Town Challenge, I scanned the waters. Sure enough there were several Gannets probably 100 meters off shore. At this point I was already sitting on 5 new ticks for the challenge area. We then headed to a new location that none of us had tried before. A small road with some water on the sides was where we were going to try and target the Flufftail. We spent some time with Trevor trying to get a call response, but we weren’t having any luck. Since I still needed the Victorin’s Warbler as a lifer, and the habitat looked good – Trevor played an audio call to see if we could get a response from the Warbler instead. And almost right away a couple of Victorin’s began responding from within the reeds just feet in front of us. Victorin’s are known for their hard to photograph nature, usually remaining well hidden and this individual was no different. In the process we managed to get a few short views of the bird though, and enough to squeeze out a couple photographs. We drove further along the road and attempted to call out the Flufftail at another location, but with the same results. Flufftail are tough birds at the best of times, but with Autumn being upon us, it’s far from the best time to find them using calls.

We moved on, and headed to Stoney Point in Betty’s Bay. In passing I had mentioned that I still needed a Crowned Cormorant for my life list, and both Trevor and Margaret are always extremely helpful in aiding others in ticking off a new bird. A short 15 minute stop allowed us to see all four Cormorants, as well as the African Penguin – 3 more ticks for my challenge list and one new tick for my life list! It was then back to the area where we were earlier searching for the Flufftail, but once again we had no luck calling it out. The Victorin’s however was still calling from within the reeds.

As we headed back towards Somerset West way, the conditions had completely changed from how they were in the morning. The sky was now almost completely blue, and the wind had completely died down to nothing. The sea was calm and glistening and it was truly a great day outside.

Our next target was going to be the African Wood Owl which are found on the Stellenbosch side of the Helderberg. They can be found within the Stellenbosch side of the reserve, though the most reliable place for them is on private property. Luckily I had spoken to the owner just a few weeks back and had his permission to come and look whenever we wanted. Upon driving to the location Trevor asked whether or not I had managed to find Greater Honeyguide in the area at all – as they still needed it for their challenge lists. I had heard of them being seen before in the Somerset West area, but they’re far from a common find and I hadn’t seen any personally. The owner of the private area where the Owls are usually found didn’t appear to be home when we arrived, so we couldn’t view the back area for them. And the front was giving us no luck.

While we walked under some Oak trees, Trevor’s ears perked up as he heard a call in the distance. Unsure if he was hearing right, he began to play a recording from his phone hoping for a response. Sure enough there came several more calls from the bird in the distance. A Greater Honeyguide!? The calls were unmistakable and while we tried to get views of the bird, we had to settle for an audio tick. But I had seen one last month at Grootvadersbosch – so I was happy to be able to tick the call.

We attempted to get closer, but the bird was seemingly moving slowly away from where we could access. While trying to find it for a visual view, we did get some nice views of a Jackal Buzzard.

At the end of the day, while we didn’t manage to get everything – we managed to get most of what we were targeting and even a few more. I ended up with 10 new additions to my 2014 Wider Cape Town Challenge list – and 3 lifers!

Plenty of thanks to both Trevor and Margaret for the invite to join them. There’s always something to learn with them, while also being good company and more than helpful. Thanks guys!