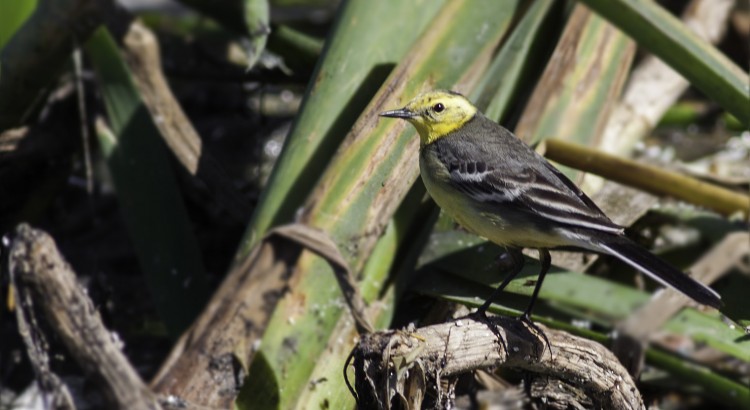 This past Saturday morning I was running through my Facebook news feed when I saw mention of a Yellow Wagtail reported at Strandfontein Sewage Works near Cape Town. Having the morning free, and having not had a chance to see a Yellow Wagtail yet, I debated the 40 minute drive for a bit before deciding to take a chance and head out to twitch the bird.

Arriving, I noticed a few cars along the stretch of road where the bird was reported, but no obvious signs of people looking at it. It was only an hour and a half after the first report had gone out and as it turns out, everyone there was searching. It had last been seen flying into some of the reeds along the edge of the water. The area is definitely not an easy place to twitch a Wagtail, with countless spots where it could find itself a comfy, hidden area.

I joined in the search and wandered around P5 and P6 and the perimeters of the pans. After about an hour and a half to two hours, there was still no sign of the bird. I got back in my car and dejectedly drove around looking for the Hottentot Teal, a species that has eluded me for years and would see them doing so once again. Despite checking in the pans and looking as best I could, I could not catch sight of the blue-billed buggers. I decided to take a break from the birding for a minute or two and focus on the landscape, the clouds overhead were dark and moody while the waters of the pans were still and reflective. I hopped down off the road and onto a small open area, finding a composition for a nice little waterscape shot.

It was soon back to Somerset West…

Only hours after arriving back I began to see pictures popping up on my news feed of the Yellow Wagtail, though it had now been confirmed that this was no regular rarity tick of a Yellow Wagtail. Instead the bird had been identified as a much rare Citrine Wagtail, only the 4th South African appearance of such a species, making it that much more special – and also that much more painful.

The next day, I continued to see posts of the bird still being present and my girlfriend and I decided to head back out that way to find it. Well she more supported and encouraged the decision…

After a 40 minute journey I was back on location, this time with a group of people in sight all staring at the same area, much more encouraging! I handed Megan the car keys and jogged quickly towards the area where the birders were gathered, on route bumping into a couple of familiar faces. “Is it still showing?”, I asked someone heading back into their car. “Yup, beautifully”, he replied. My pace increased, before I entered stealth more and got into the grass patch by the water. Initially I was struggling to locate the bird, until someone pointed out the general area. I watched, fixed on the spot in anticipation… Then suddenly… Movement! Colour!

The Citrine Wagtail showed itself well across the still waters, pecking at the shallows. Megan was soon with me, as I showed her the bird. This was her first twitch experience, and what a great first one to be at. A beautiful little yellow bird that usually exists almost exclusively in Europe, Asia and Australia. The journey to end up down here must have been an intense one!

The initial views of the bird were from about 10 to 15 meters, still far from us. But after watching his movements for about 30 minutes, the Citrine Wagtail flew right across the water towards us. Perching itself just a couple meters away for a few seconds, before disappearing again. Enough for me to grab a photo or two. We didn’t wait much longer, we had some great views and managed to get the tick. We continued around the Strandfontein Sewage Works for a while afterwards as I sought out those Hottentot Teal once again (they had been seen later the day before, when I was there the first time). But once again, came up dry…

Overall an unforgettable experience and probably one of the largest twitches I’ve been at since the Little Crake a few years back. The next day I hoped to continue the Wagtail spree and try and get the resident Pied Wagtail at the Postcard Cafe in Jonkershoek, unfortunately all we got there were more amazing landscapes and more enjoyable times.