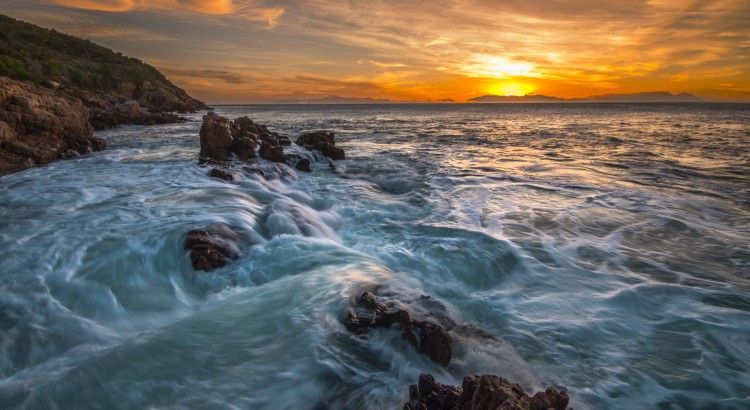 With a four day weekend on the cards, even the fact that I had to drop over a grand to get my car to get it sorted out wasn’t going to bring me down. I spent both Friday and Saturday not really doing much, and by Saturday I knew it was time to make up for the fact that I had barely seen the sunlight the previous two days. I decided that should the skies look promising, I would head down to a spot that I’ve been eying for many months, a seascape location which I had noticed while shooting another spot nearby.

Where’s the fun without some danger?

Come evening, the skies were looking promising indeed! Some cirrus present and clouds in the horizon to the west too, meaning that some colour was more likely. I put all my equipment in my car and headed to the spot, which is about 25 kilometers drive from my home. I arrived and scouted the area out, it wasn’t as easy as I thought it would be. The location was down a cliff face and there were no paths leading from the road to the rocks where I was aiming to be. I needed the shot though, so I jumped over some thorn bushes, over some broken glass and went “bundu bashing”. After about 10 minutes of wading my way through large trees, thorny bushes and rocks; I came to a partial clearing where I could get onto the rocks. Not the easiest climb down, the sun was beginning to set and I had to rush down in order to get there in time. An area caught my eyes immediately, a gulley of rocks where the water would rush through with each swell – perfect for some long exposure shots. I set up my camera and tripod, as I slowly started grasping the reality of where I was. The area is seemingly littered with the crosses of fisherman who have been washed off the same rocks, and subsequently killed. Unlike most seascape shots I’ve taken, from beaches, this was directly along the depths of the ocean and it is very difficult to judge the nature of the swell; one second you will find yourself well above the water and the next the rock will be half submerged. I needed to get right on the edge of the rock for my shot, and my adrenalin was definitely pumping. In the process of getting the shots I had to grab my gear and jump to higher ground occasionally, as larger swell pushed through. It was certainly worth the present danger though, as the sun began to illuminate the surroundings and sky with Autumn colours. To the west, the sunset was yellow/orange, while to the east it was turning a striking orange colour, which later would turn a bit red. I grabbed shots from as many positions as I could before the sun dipped. I knew I didn’t want to be down there when the sun had set, and wanted to give myself 10 minutes to navigate back up the cliff face, through the thorns, through the bushes and back to the car.

The result however, was what I consider to be some of my favourite images. Though I need to go back at another tide to grab some other compositions that are tide dependent.

On Sunday morning, I decided I would head through to Macassar to do some birding. I was hoping for some form of interesting wader, but things were fairly quiet – in fact they were very quiet, in every sense of the word. There were a few Flamingos, including some Lesser Flamingo, plenty of Swift Terns, Sandwich Terns and Common Terns, but only a few small waders in the shallows. This was the first time I’ve visited Macassar without there being any wind, the waters were still and reflected the distant mountains, and the Stilts that were feeding along the edges. 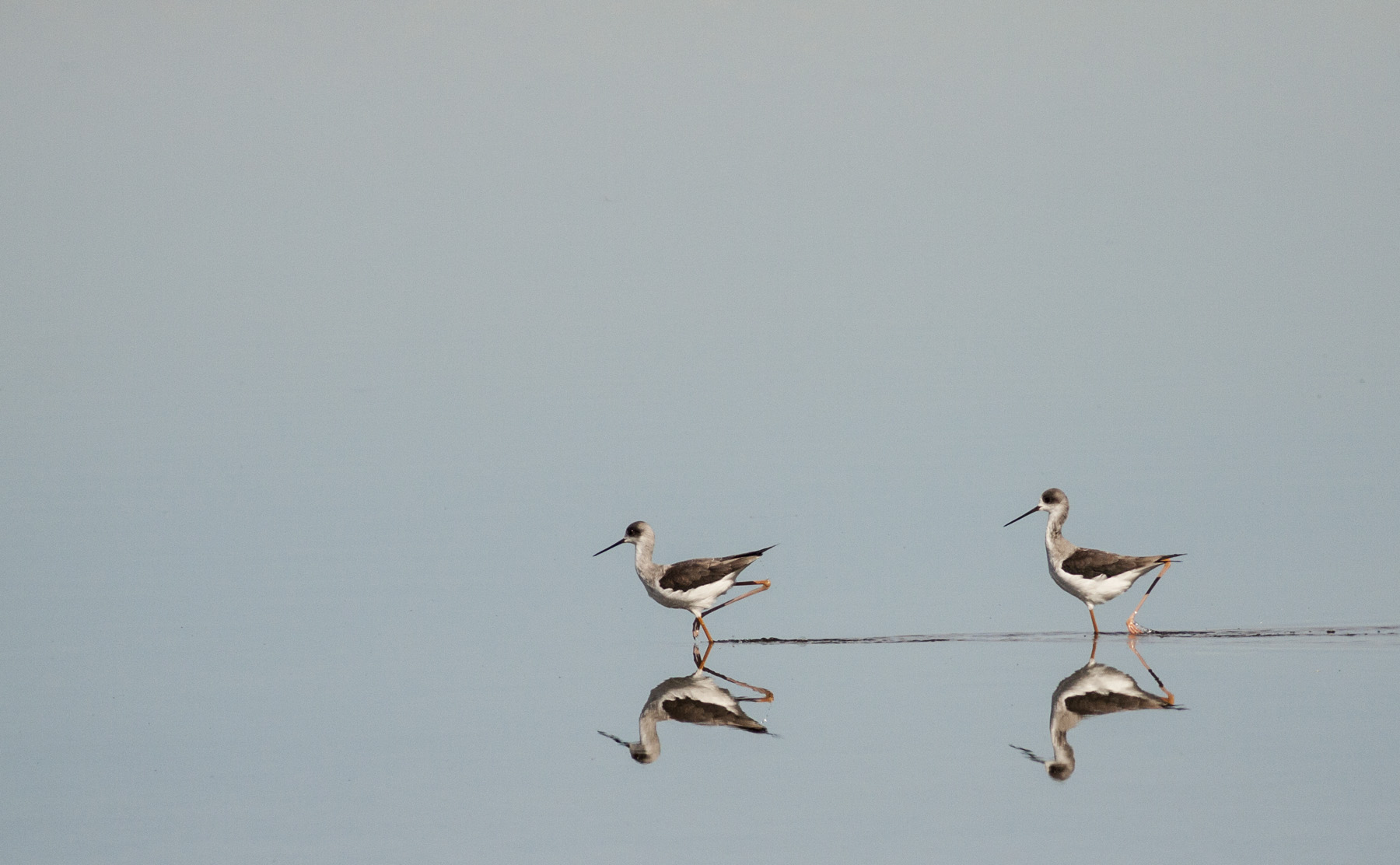 Still amped from the night before, I wanted to head out again for sunset, but was struggling to think of where I could go that I hadn’t shot before. I spent an hour on Google Earth, looking through the street views and finding areas that looked good that I hadn’t gone before. Annandale Road is a road that I’ve driven along plenty of times, and often do birding along the route. But every time I’ve driven on Annandale, I’ve gone towards the direction of Spier. I was surprised to find on Google maps, that the farmlands in the other direction are mostly publicly accessible, so I figured I’d take a drive and see. I cruised along Annandale, taking a right into one of the farm turn offs, where there is wine tasting and food available. I reached the dead end and I was unable to find any ideal locations to shoot, with hills and trees mostly blocking the view. On the way down however, I noticed the light cracking down a hill and illuminating some of the weeds along the ground. It seems I wasn’t the only one who noticed this though, as two other photographers were also stopped and shooting the scene. Not one for wanting the same shots as everyone else, I took one or two of the ground before deciding to climb the hill and see what the view was like from the top. A much more pleasing location to me, the hill gave a pretty good vantage point. I found myself fighting with my shadow a lot of the time though. It’s always tough when the best photographs are taken with the sun behind you, but when the sun is behind you and at a low position, it means your shadow tends to climb into all your photographs. I got some panoramas I was quite happy with, and felt that it was another successful mission for the weekend.

With it being the final day of the long weekend, I wanted to head out again and the sunset was looking fairly promising again. There was a large area of altocumulus clouds that had been pushing through in the day, and they were still present in the evening. Initially I had figured I’d head towards the ocean, but the clouds were more prevalent, in a strip near Stellenbosch. So it was off to Stellenbosch again to see what I could do. 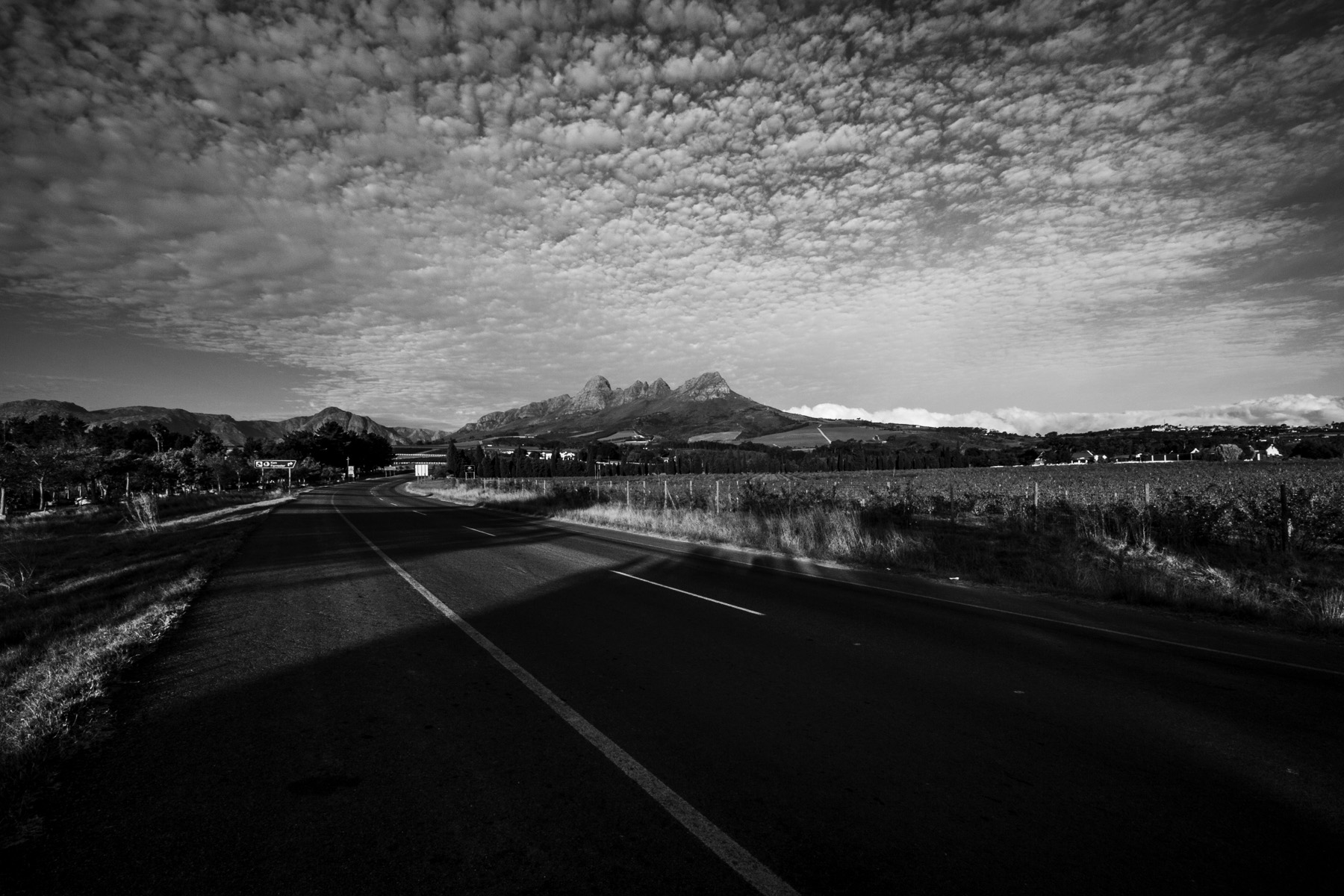 I try and avoid going into farms because of the uncertainty of permission requirements. So I first did a scouting of where I could stop on either side of the road, and then did a U-turn and headed to a spot just outside Klein Helderberg where there was enough space to pull over safely on the side of the road. I hopped out and jumped down a ditch, managing to avoid falling into a stream – narrowly. The field was filled with yellow flowers, and the lighting was quite good, except as with before I found that my shadow was ruining most of my compositions. I took several panorama and vertorama images before heading back to my car. As I got back up from the road side ditch, I noticed some smoke coming from a nearby farm, that wasn’t there minutes earlier. It seemed to be spreading quite quickly and I decided to rush over to check it out. The fire was coming from an area just off Annandale Road. I was the first one on the scene it seemed, and took a couple of shots. Within a few seconds the first sirens sounded in the distance. Less than five minutes later there were 4 fire trucks on sight and 3 other emergency vehicles. They had an amazing response time and they seemed dedicated to getting the fire under control. At this point the road was filled with cars watching the blaze. It was about 15 minutes after I had arrived initially that the firemen seemed to have things under control.

3 thoughts to “Weekend of Photography”