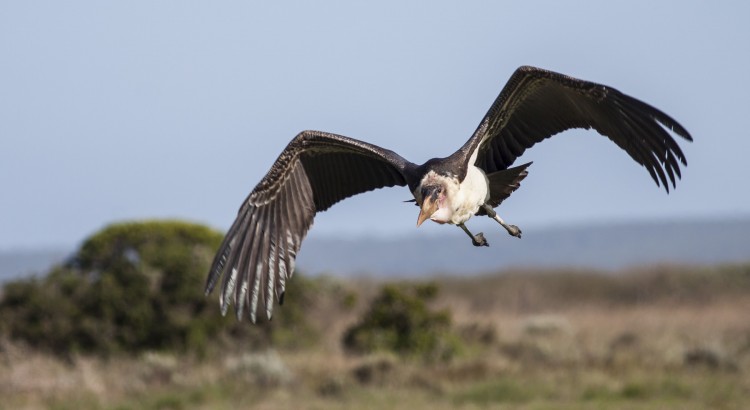 If you read my previous blog entry, you would have seen that while attempting to twitch the Marabou Stork near Bredasdorp, the car I was driving managed to suffer a case of the flat-tyre. In turn, we had to call off our plans to head to Bredasdorp and make a straight line back home.

It was later on that evening when I got a facebook message from Trevor Hardaker saying that he saw that we had suffered some bad luck with the flat, and that him and his wife Margaret were going to be heading through to find the Marabou Stork the next and offered that due to lack of transport, if we’d (Cathryn and myself) like to join them while twitching the bird. Obviously both Cathryn and myself jumped at the opportunity, not only would we be heading out with one of the leading birders in the country – but also being able to get to know Trevor and Margaret in an environment outside of facebook (even if social skills are not my strong point). We arranged everything by phone and was set to meet up at around 7:45 on Sunday morning.

On the morning, we met up at Waterstone, which seems to be the common meeting place for birders in the area, and we headed out for the 90 or so minute drive to Bredasdorp. The drive there was familiar, very familiar… As we had driven it only a day prior, but at least we had comfortable transport and entertaining company. I think this was the second time I had met Margaret, and probably the only time we had progressed past a greeting, though we were now able to jointly complain over our partner’s filthy nicotine habits, unbeknownst to them – well unbeknownst at times.

While driving through the farm areas, Trevor noticed a Giant Kingfisher on a telephone pole and with Cathryn having yet to see one, we did a quick U-turn and got into position and took a few photos. Trevor stopped the car and we stretched our legs a bit, while he attempted to get some photographs of the bird himself. I know all about the challenges of being the driver while still wanting to get photographs. It wasn’t long before we were back on the road though and headed for the Stork. The Marabou in question had been seen for a while there now, usually around a single field just outside Bredasdorp – but it was a species that had eluded both Trevor and Margaret on their challenge and were keen to try and connect with this individual.

The rest of the drive was pretty much a continuous journey through some small towns, until we got to the farm where the Marabou Stork had been spotted. Upon entry to the farm roads, we saw a Black Sparrowhawk feeding on a Guinea Fowl on the ground, but was quick to take flight as we slowed down for a better look as to what it was. With the time now around 9:30, the Sparr was clearly grabbing breakfast.

We continued down the gravel road for a few more minutes, Cape Crows and Spurwinged were the order of the day it seemed – then suddenly there was a murmer from Cathryn, “errrrr, what’s that.” – We all looked over to the right side of the car and walking there, like an old man on stilts, wading through water, the Marabou Stork moved step by step forward next to us. The bird was unmistakable, clearly quite a young individual – and most certainly not the prettiest of birds, at least not in the conventional sense. We quickly stopped the car and got out, cameras in hands and walked to the fence where the bird was, positioning ourselves for the sunlight. We were extremely lucky and had the sunlight on the right side (or the bird on the right side), which was surprising since all the reports had seen the bird on the field on the opposite side of the road, which would have offered horrible lighting. So not only do we locate the bird after 5 minutes of looking, but everything is perfect for photographs too – then the bird started to give us some fascinating behaviour as it tried to scoff down a large animal carcass, occasionally ripping off small pieces and swallowing them. These birds are scavenges and this behaviour is typical for them, but to witness it first hand is something special.

We continued to shoot it for another 10 or so minutes, wondering how it could get any better, when suddenly the bird – out of nowhere, began to take flight. We were all quick on the draw and got some great full frame close ups of this rarity passing just over us. The bird then landed quite a distance away on the field where he had been seen prior. We had gotten everything we wanted, needed and could ever have imagined. There was really nothing more the bird could have done for us to make the sighting any better.

With us all feeling accomplished, we stood around and had something to drink and a muffin. The smokers smoked, Margaret photographed some butterflies along the road side, and I kept my eyes to the skies hoping for something special (call me greedy).

Around the immediate area we came across some Larks, and in a group of gumtrees there were some Fork-Tailed Drongos. Further along the roads we came across Capped Wheatear, Blue Cranes and a single Red Bishop, and then of course Denham’s Bustards… So many Denham’s Bustards. Originally when we entered the farm area we came across around 8 of them in the first field alone, we later came across numerous others – though as Bustards tend to be, they were very shy of both us and the cameras and would always be running away from the road when we passed by, and never on the right side of the light. But we managed to come across a few that offered just a little bit of opportunity.

When taking a break along the road side, the Hardaker’s decided to try and help Cathryn and I with our life list. The bushes in front of us had Southern Tchagra, Acacia Pied Barbet and Crombec – all of which neither Cathryn nor I had seen yet. Trevor’s original reaction was, “It’s like clubbing seals.” It turned out that if clubbing seals was really comparable, there’d be a lot more happy environmentalists. We managed to get some sightings on the Southern Tchagra quite easily, but the others were having none of it and refused to respond to some audio calls. We spent probably around 30 minutes trying to get sightings on the two species, but all we ever did was hear them. I think Trevor and Margaret were more bummed about not being able to get us the lifers than we were!

It was then back in the car and onwards home, though not before a good Wimpy meal on the way back. Quite a fitting way to end an extremely enjoyable and successful morning of birding.

A truly heart-felt thanks on behalf of both Cathryn and I must be extended to Trevor and Margaret for the offer, and allowing us to join them for the morning. We both had a wonderful time and we hope to do something similar again soon. Definitely one of the highlights of my short, but thus far sweet birding life.

3 thoughts to “Twitching A Marabou Stork”