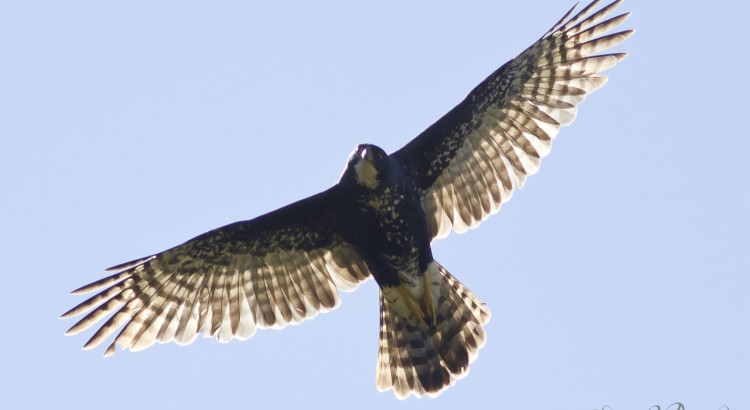 Well now, where to start? The beginning as good a place as any…

Yesterday (Friday 7 September 2012) I went to the Helderberg Nature Reserve as I often do during my lunch breaks, I started out at the pond before seeing one of the Cape Mystery Buzzards near their breeding forest, hence I decided to head in that general direction with my camera. I got to the forest area but I could no longer see the bird, I decided I would circle the forest once and then head back, but my adventures took a bit of a turn a few minutes later. As I walked around the forest, after having a Small Grey Mongoose run out in front of me in the distance, I turned the corner and started monitoring the skies for raptors, this is when I saw a Pied Crow and a much larger bird, it was still very far in the distance so my assumption from eye was just another Buzzard, but I then took a photograph and zoomed in on my viewfinder, suddenly I was thinking “This is an Eagle… One that I definitely haven’t seen before”, as time was limited I had to make a quick call as to whether I would go straight back or risk being late back to work – it took about 20 seconds before I decided I would compromise and try running in the Eagles general direction, I started sprinting through an old over-grown path that runs alongside the one forest, coming to a bit of a clearing and stopping to take a few photographs – I had no idea there would be identification issues so it was never really a goal to capture things like upper-wing patterns, so I only took a few photographs before it started to get chased to the north by the Pied Crow.

Furthermore, I was slightly distracted by what I presume was a Cross-Marked Whip snake that was out enjoying the sun on the path ahead of me, not only did this distract me from the sky a bit but a mammal then popped out from the bushes next to me and ran along the overgrown path I was on. While walking back to my car, I also had a Jackal Buzzard come out from a nearby tree and begin circling directly above me at a low height.

I got home and looked at my field guides, but I couldn’t find an ID. As tends to be my process, if the field guide fails – I asked Trevor Hardaker to help with the ID and his reaction said a lot, he went on to say that his gut told him that it was a Lesser Spotted Eagle, though due to the lack of upper-wing photographs it could also be a Steppe Eagle. Later on in the evening after forwarding the image to a few of the other local birders another option was liked by a few when Tertius Gous said that he thought it was a Tawny Eagle, though which ever of these it was – it was going to be a rarity that would attract some twitchers.

I had woken up at 6 on Saturday morning for the Somerset West Bird Club outing and drove through to the meeting point, though it wasn’t long before I felt a niggle in my right side – the same niggle I have felt several times prior as a precluder to a kidney stone issue, because of this I wanted to err on the side of caution and rather remain close to home and not be stuck in another town, with someone else having lifted me and be in need of returning, instead I decided I would just do some local birding. Though before I left the parking lot where we meet, I managed to finally get a few (bad, but passable) images of the Peregrine Falcon that we see almost every time we meet for our outings, perched in a tree in the parking lot.

The focus turned to the area I had seen the Eagle the day prior, the Helderberg Nature Reserve. I arrived at the gates of the reserve at 7:15 and had to wait for the gates to open, though in this time I just ate some breakfast in the car.

After entering, by 8:30 I was hearing the Mystery Buzzards calling – and while on route to my destination I managed to finally come across one that was perched – allowing me to get closer than usual. Shortly afterwards I heard Black Sparrowhawks calling from inside the next forest – I walked along the path which goes through the middle of the one forest and to my surprise a dark morph Black Sparrowhawk was sitting on an open dead tree branch just a few meters from me. I quickly grabbed some shots, assuming he would want to fly away as soon as he heard the shutter or saw the lens pointed at him, but he seemed very content to just sit there and watch me.

I then moved to the area where I had seen the Eagle first the day prior, and waited around there – no sign of anyone else though. I gave Trevor a call to see where they were and apparently they were up near the pond where I had last seen the bird heading, but while I had seen the bird heading that way the day before there was just no way I could imagine it being there – with that area of the reserve being the most active with walkers, runners and screaming children – I asked Trevor to come to my location as the viewing I have found of late, is definitely better in that area. It wasn’t long before Trevor and another gentleman met me near the front entrance and we began our walk to the area where I was prior. During this walk a car pulled up with a couple of Somerset West birders, Basil Boer and Johan Slabbert, followed shortly after by Michael McSweeny – another birder who had been disappointed a few months prior when the Green Backed Heron put in it’s very short stay in the reserve.

We saw the Mystery Buzzards in the distance a few times, sometimes getting relatively close, but then always dipping down into the forest. Then a shock to me was Trevor recognizing the call of a Klaas Cuckoo in the forest, a bird that while by no means rare, is an amazing looking bird that has still eluded me. Suddenly our attention was focused on something in the far distance that Basil spotted, “Is that a Verreaux Eagle?!” He asked… After a short wait that involved Trevor going through his camera and zooming in to the bird in question, that was very far in the distance – “It’s a Long Crested Eagle”, Trevor said… In a tone that seemed far too non-chalant for what had just been seen. This is almost certainly the same Long Crested Eagle that I had seen only meters from our position a couple of months ago, and suddenly while we still had no sign of the ‘Mysterious Eagle’, the day was looking good. There was another bird that was near the Long Crested Eagle and Basil called that it may have been a Booted Eagle, which turned the discussion to this species, which while apparently common – I had also never seen. About 15 minutes later Basil’s call got validated when the Booted Eagle moved down towards us, though still very high in the sky it was close enough to ID, and great for me, it was a lifer! We could have ended the day there and I would have been happy.

There were some other sightings in the far distance which included a Rufous-Chested Sparrowhawk near to the forest where they breed. Mike had to leave due to commitments elsewhere which was then followed by Basil and Johan, who went to get photographs of the Black Sparrowhawks in the forest. It wasn’t that long before we started to hear the Black Sparrowhawks calling very actively and then got visuals on one circling over the forest area, we decided to go and try get closer, as if we weren’t going to get photographs of the Eagle, we may as well make the most of what’s there. I lead Trevor and Jeff (I think) towards the area where I had seen it on arrival, and it was still in that area – and very willing to co-operate! The Black Sparrowhawk took flight circling around us a couple times, the third time being the charm – offering some excellent photographic opportunities. I rarely feel as though I’m close enough to the bird, but this was one case where I definitely felt that I wouldn’t have to suffer the pains of harsh cropping.

We then moved on to where the Cape Mystery Buzzards tend to rest, hoping to get some decent photographs, though they definitely seem to be more shy than the Sparrowhawks. While waiting for some to show properly we saw a White Necked Raven and a Yellow-Billed Kite pass over us, a bird that I can only ever seem to photograph going away from me. Trevor also spent some time pretending to be a woodpecker, to attract some of the Olive Woodpeckers which were heard in the forest. We were then met by (Rob?), I am terrible with names and social issues always end up making introductions either awkward or not occur, regardless – he is apparently a long time birder from the area and is well versed in birds, especially in the area.

The time was now around 13:20 and a familiar face came up through the forest, Tertius Gouws who was the leader for the club outing on the day had returned from SANCCOB and had joined us in the search for the Eagle. The primary sightings after that were the Mystery Buzzards with both the rufous and the more lightly marked individuals being seen. Trevor then decided to call it a day leaving Tertius, Jeff(?), Rob(?) and myself. ‘Rob’ then showed us to where the Rufous-Chested Sparrohawks nest and managed to lead us right to an individual perched in the forest. When we exited the forest we had a Jackal Buzzard overhead in the distance circling, followed up with the breeding pair of Rufous-Breasted Sparrohawks comin out of the forest and displaying nicely. To top it all of, one of the Cape Mystery Buzzards got fairly close as it moved into the forest and offered a nice close to the day.

In the end, what started out as a day that looked as if it may end up in ruins – missing out on a much looked forward to outing, ended up in one of the best days in the field that I have ever had. Though after 9 hours in the sun without any sunscreen, I am now feeling the burn – quite literally.

Amendment: Later on Tertius Gous and myself came across the same Eagle, managing to get some different shots – including upper wing patterns. With these patterns we established with the confirmation of Trevor Hardaker too – that this was likely a Tawny Eagle.

4 thoughts to “The Search for the Mysterious Eagle”