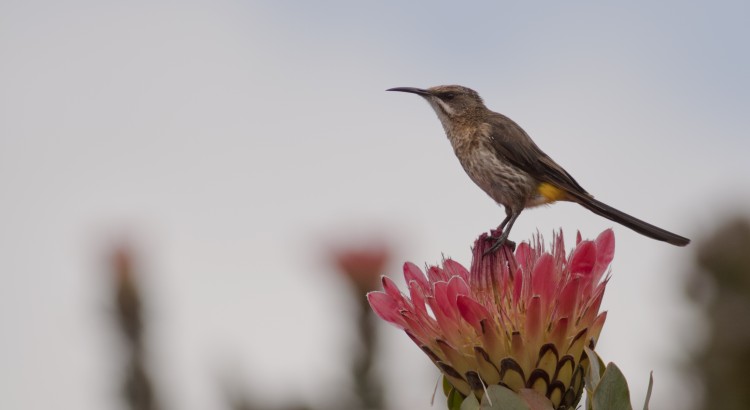 For those reading with the intention of only hearing about the Tawny sighting, you can scroll down to Tuesday 25 September.

Another lunch time meet up with Tertius Gous at the Helderberg Nature Reserve started off with a sighting of a Juvenile Jackal Buzzard in close proximity on the drive there, I stopped the car and jumped out to get some shots, with some success. When I got to the reserve Tertius mentioned a sighting of the first Paradise Flycatcher of the season near the gate entrance, a bird that I hadn’t yet seen, due to my lens breaking on the doorstep of last years summer season, and essentially leaving me with no summer birding (though I plan to make up for it this year). We spent some time locating the bird but it wasn’t long before the distinct blue face with long orange tail was visible through the cracks in the dense bushy area. I was quick to fire off some shots as record photos of the lifer, and we soon were back to watching for Buzzards.


I should mention that the week prior to visit, we had both on different occasions witnessed a pale Forest Buzzard in the area, though both of us managed to get nothing more than record shots, so our target was to try find this bird and get some good photographs of this beauty.

After a while of quiet, we were interrupted by the distinct call of one of the Buzzards from within the forest near us, this was followed by the winged shadows darting between the trees, we began to move closer and to where it seemed to be heading, suddenly – the distinct pale body emerged from the forest, along with another familiar rufous figure. As luck, or the lack of it would so have it, the bird took flight into the opposite direction and we were forced to make a run for the opening and try to get some shots, but by this stage it was far in the distance – it began circling, rising with the thermals until we lost it, though I soon realized this wasn’t all we had lost, somewhere in the chase I had dropped my cellphone, though after 3 hours of searching and 2 days, I managed to recover it.

After some fairly horrible weather for most of the weekend I awoke on the Sunday morning to a sky of partial blue, while there was still the lingering of rain I felt the need to get out in the field and quickly made another trip to the nature reserve. The wind was brisk and I didn’t expect much raptor activity, so I focused my attention to the smaller birds and instead of the usual attempts to just get the record shot, I was able to focus on backgrounds and composition and atmosphere. The Swee Waxbills were active, carrying nesting material around while some of the Cape Canaries fluttered between the pines.

Of interest were two Black Sparrowhawks which nest in the one plantation. One of the pair swooped down quickly and grabbed some prey off the open area between the two rows of trees. Unfortunately with the bird being so quick and lighting being less than ideal, I wasn’t able to get a very good shot, and the speed in which I whipped my camera in its direction is very visible.

Another day of less than ideal weather, but the cold front had passed and the clouds were beginning to thin a little. I headed to the reserve at around 9am and decided to take a different route, walking towards the north east. Things were quiet, except for a handful of Pied Crows, chasing each other in what appeared to be a playful manner. I decided to wait around in an area with a decent vantage point, and good view over False Bay, it wasn’t too long before a Yellow-Billed Kite flew past in the distance, giving me the first real sighting of the day.

A walk back down to the Buzzard’s nesting area resulted in a short sighting of the two nesting individuals, but they were quick to return back to the forest and the day was left feeling somewhat empty, an African Harrier Hawk was also seen in the distance on the walk back to the car.

Later in the afternoon I was given a pleasant surprise when a Spotted Eagle Owl perched itself on a branch just outside out back door within our garden.

Tuesday was by far the most promising day in a while, the skies were clear, the temperatures were in the mid 20s and the wind was light. I met Tertius at the reserve again at 1pm and we had an hour to see what we could encounter. Things started off great when we noticed that the Black Sparrowhawks have successfully hatched a couple of chicks. After looking at the cute little guys from a distance we headed through to an open area to do a bit of Buzzard watching, it was then a quiet 5 or so minutes until things suddenly exploded! Before we knew it we had 2 different Cape Mystery Buzzards circling ahead near us, then another! There were 3 individuals, 2 of which seemed to have gotten chased away by one of the nesting Buzzards though.

We then moved back towards the forest where they tend to be present most of the time, and were ready to just stand around and wait, looking at the sky, but then something caught my eye, something in the distance against the backdrop of the Helderberg Mountain. Immediately I knew that this was something good, the wing span was just too wide and immediately I knew it was an Eagle, though wasn’t sure which.

Tertius and I began firing off shots and it wasn’t long until we both knew, without any real proof – that this was the ‘Mystery Eagle’ that I had encountered at the reserve 3 weeks prior and that was assumed to have gone elsewhere by now.

The bird was far in the distance still and we found ourselves in hot pursuit, running through the paths, trying to get closer to the bird, while making sure that we still got what shots we could while chasing. This bird had been cause of a lot of ID disagreement, with original shots almost only being of the under side of the bird prompting both local and international experts disagreeing on whether this was a Lesser Spotted Eagle or a Tawny Eagle. This time we were both determined to get some upper wing shots to help the ID process so that we may finally know just what Eagle it was!

We managed to get a bit closer to the bird, though still having it flying too far for anything other than attempted ID photographs. Just then another raptor, a Buzzard circled above us – we quickly focused our attention for a few seconds on the Buzzard, firing off a few shots – though in the adrenalin of the Eagle chase, neither of us really processed what the Buzzard was, assuming it was one of the Mystery Buzzards. It was only once I opened the image on my computer in the evening that I saw it was in fact a Forest Buzzard!

We headed back to the cars shortly afterwards, with Tertius heading up to the area where we had seen the Eagle go. I stuck around while my car refused to start, and while waiting I encountered both male and female Paradise Flycatchers, followed by another sighting of the Eagle, followed by a Jackal Buzzard and 2 Harrier Hawks circling fairly close to me. The bird life was off the radar, with something to look at in every direction, though I unfortunately had to head back to work.

After the images of the Eagle were uploaded, a consensus developed that the upper wing patterns would suggest that the bird is in fact a Tawny Eagle, while not a Lesser Spotted Eagle, a Tawny for the area is still a great record. I am hoping that this coming weekend I will be able to spend more time at the reserve, trying to find the Eagle again!

One thought to “The Return of the Tawny”