On Friday a whatsapp message came through in a birding group, of a Great Egret spotted by Dave Winter, just passed Rooi Els. The message arrived just after 17:00, and once I had seen it, the time was already 17:30. I had to decide whether I’d make it to the location before sunset. I already had my 10-20mm packed as I was heading to the coast to photograph the sunset, but I ran back inside, got the 400mm and raced off in an attempt to make Rooi Els with light to spare.

Arriving at Rooi Els, the sun had just minutes left in the air and light was already fading fast. I had about 5 minutes of scouting available before the light disappeared completely. Unfortunately I didn’t manage to see the bird. However, on my drive back to Somerset West, I did stop and take some post-sunset long exposure images of the Rooi Els area, so the chase wasn’t a complete loss. Still needing the Great Egret as a full lifer, I made sure to set out early again on Saturday morning. This time, I arrived to see the Egret just visible on a small hill near the burnt area of natural wetland. The burnt dead trees which littered the foreground often made him a little tough to see, so I parked and headed down to walk in adjacent to the bird, making sure to not get too close and disturb it. He continued to walk around the area and feed, allowing me some pretty good views at times. Knowing that others still wanted the bird and may still come, I made extra sure not to push it in any way (even though I was stuck on the wrong side of the light). Since I was already half way there, I figured I may as well head through to Rooisand Nature Reserve passed Kleinmond. With some early summer records already reported, I wanted to see if perhaps there were any of the migrant waders back in the area.

Arriving at Rooisand, a pair of South African Shelducks were present near the entrance, along with an Immature African Fish Eagle flying overhead. I walked the pathway to the bird hide, coming across much of the usual species: Cape Teal, Blackwinged Stilt, Kittlitz Plover etc. From the bird hide, I had visuals on a massive grouping of aerial feeders in the distance, most seemed to be Brown-Throated Martins, however there seemed to be a Swallow or two in the mix. A group of Little Swifts were also present in the distance.

In front of me, I had a couple of Kittlitz Plovers chasing each other around a small island. Flying swiftly across a short distance, then running around and repeating. Closer to the hide were a couple of Red-Capped Larks. A couple of Bokmakieries were calling from the bushes, as well as two Pied Kingfishers feeding on the edges.

A Common Whimbrel flew by at one point, from the edges of the water. Along with sightings of a couple of Ruffs, still with slight evidence of their breeding plumage. They too, were feeding along the furthest edge of the water from the hide, and were only IDable cause of the bold orange legs in flight.

I had already begun my trek home when I remembered that the Canola fields are busy flowering just passed Botrivier, about 10 kilometers from where I was. I made a U-turn and changed my destination from home, to the fields between Botrivier and Caledon. I’ve been wanting to shoot the Canola / Rapeseed for years, but for some reason have just never followed through with the plan.

On route, I got my first sightings of a Yellow-Billed Kite for the season, as well as views of an adult African Harrier Hawk flying above Arabella. 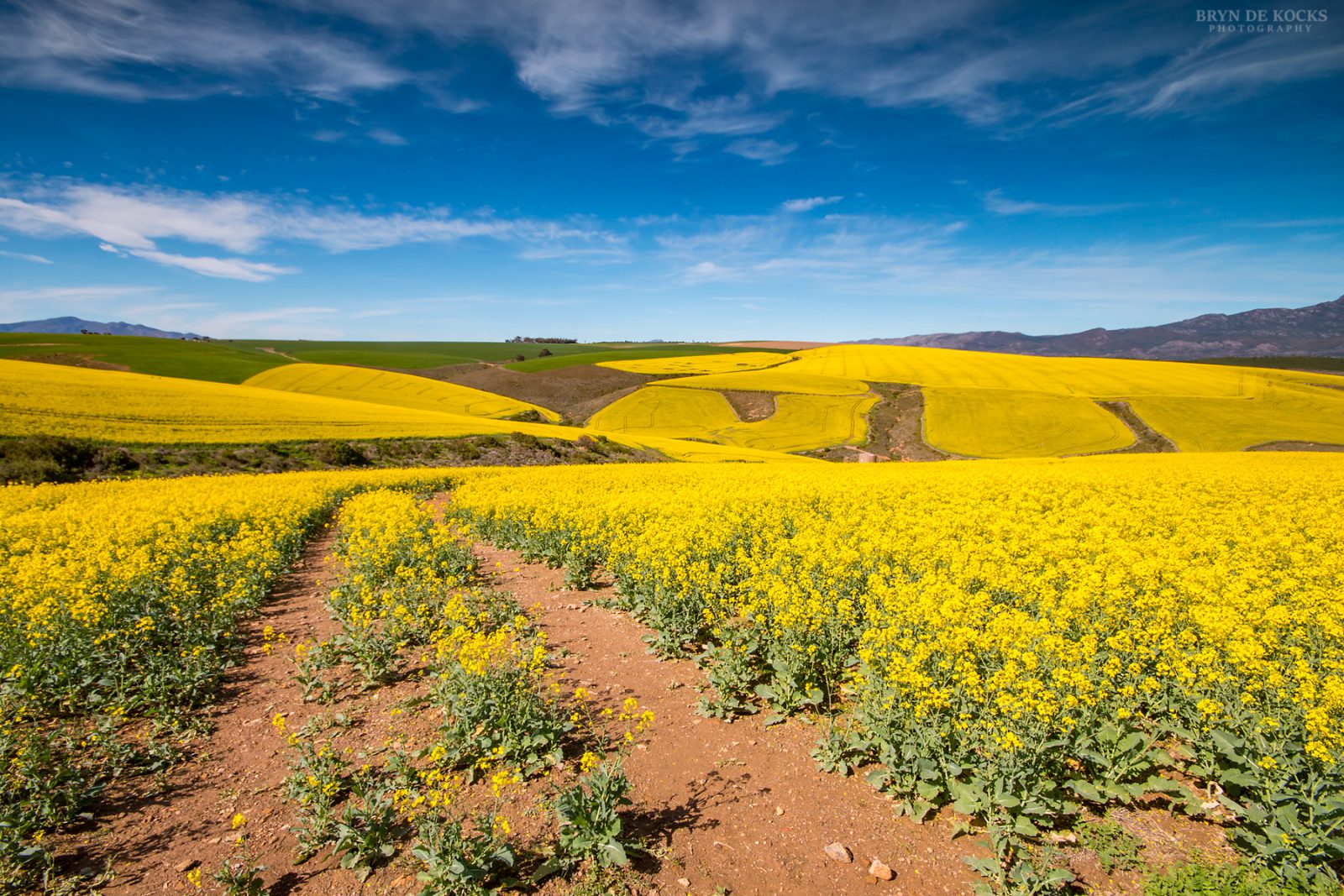 After a short drive from Kleinmond, I found myself visiting various farm fences in an attempt to find the best possible composition for the photos. The yellow Rapeseed had covered large portions of the landscapes, and I wasn’t the only one taking advantage of the views. There were several individuals who had stopped at points to photograph the fields. The sky had decided to play along as well, with whispy cirrus providing some more life to the images.

Would like to revisit these fields some time on the approach of a cold front, or during sunset, for more drama and different lighting. However, I am happy with this as a first attempt on the area.