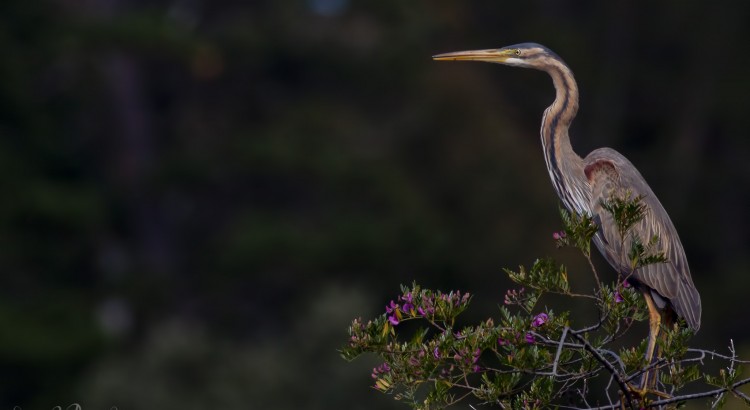 There was a bird club outing this Saturday morning, but unfortunately I was not able to get up at 6am due to a lingering illness I’ve had for a few weeks now, leaving me desiring more rest, or so was the plan. I ended up waking up around 9:00 and despite the forecasts calling for a whole lot of rain, when I looked outside the skies were predominantly blue and the wind around my area looked relatively still. I decided I may as well go make the most of it, since rain was still possible later in the afternoon.


I started out by heading through to the Helderberg Nature Reserve, where it was really quiet in terms of people – which is always nice. I walked to the main pond and as I walked up the steps a Purple Heron flushed from the reeds in front of me and went and perched on top of a tree along the pond bank. I walked around the pond looking for signs of any interesting birds, though only the usual suspects were out, Cape Robin Chats, Cape Weavers, Karoo Prinia etc. In the distance I then spotted something unusual for the reserve, a couple of Hartlaubs Gulls, a first for me in the reserve. This week I had seen a number of Hartlaubs and Kelp Gulls flying around the main road, a good 5km from where they are usually seen.

I then headed through to the more wooded areas in the hopes of coming across one of the visiting Cuckoos, though no luck. On the way back to the car, a Jackal Buzzard flew just a few meters over me and began to ascend against the morning sun. I then got back to my car and due to the gull sighting, decided I would go down to Strand beach and see if there was perhaps anything of interest that has come ashore. On the way out the reserve gate I stopped quickly after seeing a Black Sparrowhawk flying into a tree along side the road. This individual is one of the parents of the couple of youngsters they have bred in the one forest this year.


I got to Strand beach a few minutes later and headed for the river estuary where the tern roost is. First sightings upon arriving were Cape Cormorants, Great Cormorants, Reed Cormorants, Gulls and African Black Oystercatchers. A single White Fronted Plover and a pair of Blacksmith Lapwings were also present. I remained along the fence and watched the skies, it wasn’t long before a pair of Sandwich Terns flew past, the first time I’d seen this species at Strand. Then some more Herons showed themselves, a Grey Heron and Black Headed Heron spent some time in the low estuary waters before flying off. A pair of Oystercatchers got into quite a fight along the waters edge for a while too which was entertaining. A Rock Kestral passed by in the distance with a backdrop of dark rain clouds. A single Pied Kingfisher also flew across the beach and over the ocean waters.

I then decided that since I am so close, I may as well head to Dick Dent. I arrived and was pleasantly surprised by the lack of homeless people in the hide. The Red Bishops were active, and a Red Knobbed Coot with a pair of chicks could also be seen shortly after entering. The sanctuary resonated with the sounds of Warblers. The usual suspects – Sacred Ibis, Dabchicks and Cormorants were all quite abundant. At the last main pond of the sanctuary I was also pleasantly surprised to see that the White Backed Duck I had seen here 3 weeks prior was still present! I spoke to someone else who went to find it a week after my initial sighting and he said he saw 2 of them there when he went, so hopefully this may be the start of something good for the reserve.

The day was quite interesting for one that was supposed to be rained out, but I’m still looking for that next rarity.