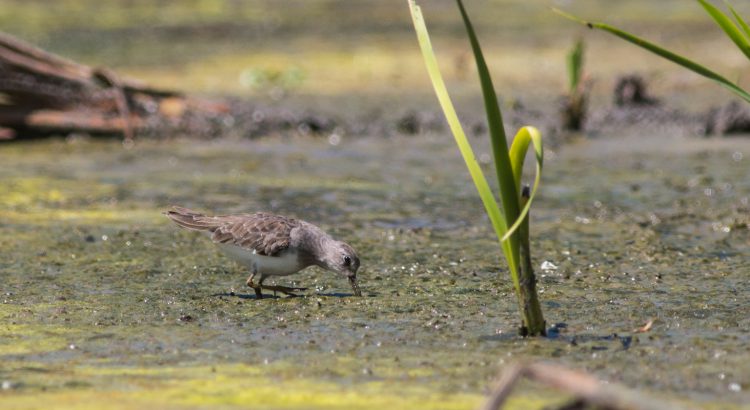 While scrolling through my news feed on Facebook last Tuesday, I came across a post by Glynis Bowie asking for identification on a bird she had seen the previous weekend at Strandfontein Sewage Works. Me being the way I am with waders (In other words, useless) – I relied on the comments of others to see what the bird was identified as. It wasn’t long after the post being put up that the comments section kicked up a storm with the bird being identified as a Temminck’s Stint. It wasn’t long before an e-mail was sent out via the South African Rare Bird Report stating:

I can’t believe that I am typing this, but…

TEMMINCK’S STINT – a single individual was photographed on the eastern edge of Pan P1 at Strandfontein Sewage Works… There has not been a confirmed record of this species in Southern Africa for a VERY long time so, if it is still around, it is going to cause absolute mayhem!!

It had been a while since my last twitch, with other things keeping me at home more recently and the newly flared dangers of the N2 highway making me hesitant for any traveling, but I told myself that I would see if the bird was picked up again the following day and then make a call on whether or not to head through.

Come Wednesday morning, I had just woken up and opened Facebook. The first confirmation was already up from Trevor Hardaker that the bird had been located again around the same area. I decided to go for it, quickly messaging my boss and asking for a late start to the day which would be worked in during subsequent days. I was out of the house by 07:45 and on route through to Strandfontein. The weather was great with temperatures already in excess of 24’C, and with only a light breeze present.

After entering Strandfontein’s Sewage Works area, it was easy to tell the general location of the bird by the numerous cars which lined each side of the gravel road ways. Men in business suits were standing with scopes, hoping for a quick tick before heading to their respective places of employment.

I made my way around to the P1 pan and attempted to sneak the location information of the bird from the lips of other birders, staring into the shallow pools of water in front of us. Being shy, asking where it is located is something that is difficult to do, so instead I attempted to eaves drop. A kind women standing next to me turned to me and asked

She then proceeded to point out the tiny bird in the distance across the small area of puddles, it was skulking in the dead reeds, barely visible even through a 400mm lens. Had I not known what I was looking for I would certainly have struggled to differentiate it from any of the other Common Stints that were roaming around the same general area. The bird was not looking to show off and continued to move in and out of the reeded area. Eventually I decided to give it some time and check what else was happening around the area.

It was then that I heard someone mention that there was also an American Golden Plover seen nearby, another bird that I had yet to tick off my life list. So I began my walk across to the opposite pan where it was last seen.

More Than What I Bargained For

On route to the AGP’s location I stopped and scanned some more waders near the banks of the southern side of the P1 pan, where just a couple people were standing. Just meters away from me was a Wood Sandpiper, another fairly common wader that had eluded me through several years of birding. Just seconds later someone exclaimed, “Pectoral Sandpiper!”

Just a few feet from the Wood Sandpiper was a single Pectoral Sandpiper, which was showing well for us. It was the first time that the bird was picked up before being reported to the SARBN. The Pectoral came out into the open and allowed good views for the now gathering crowd who was moving away from the Temminck’s and looking to enjoy another rarity.

After spending some time with the Pectoral I moved on towards the American Golden Plover, where Michael McSweeny happened to be parked. After a brief catch up he pointed me towards the Plover which was standing at a distance in the grassy bank before the water’s edge. The views weren’t great from such a distance but it was an easy tick and an amazing four new additions to my life list in the matter of an hour.

Almost a clean sweep, just missing the Red-Necked Phalarope that was also reported in the next pan.

After getting home after the first twitch of the Temminck’s Stint I felt I left a bit empty handed in terms of photographs, with the Temminck’s only provided very limited views. So on Saturday Monique and I headed back towards Strandfontein for a second look, and the hope that the Stint would be more obliging.

We got to Strandfontein in the middle of the morning and made our way directly to the Temminck’s where there was again a large number of enthusiastic birders parked along the roads. Upon arriving at the Stint’s location, we had short initial views but he was once again playing with the emotions of twitchers. After struggling to get good views again, we moved to the Red-Necked Phalaropes which were showing well out in the open, again mere meters from the Stint. Unfortunately a bit too far away for any decent photographs, but enough for some record shots. It was also here when I managed a second tick for the day with some Ruff being present just behind the Phalaropes, along with a single African Snipe.

It is always humorous how I’ve seen over a dozen rare birds, and even picked up some regional rarities myself over the years – yet I had remained deprived of a basic Ruff. But now it’s finally in the bag, and I can set my sights on other ridiculously common birds that evade me, like the Cloud Cisticola, who I’ve heard a thousand times but never had good enough views for me to tick.

This twitch, with a total of 6 ticks also brings me to the 281 mark for my provincial list and ever closer to the desired 300. I have also pledged to get whatever my 300th bird is, tattooed on me. So let’s hope it’s not a wader 😉