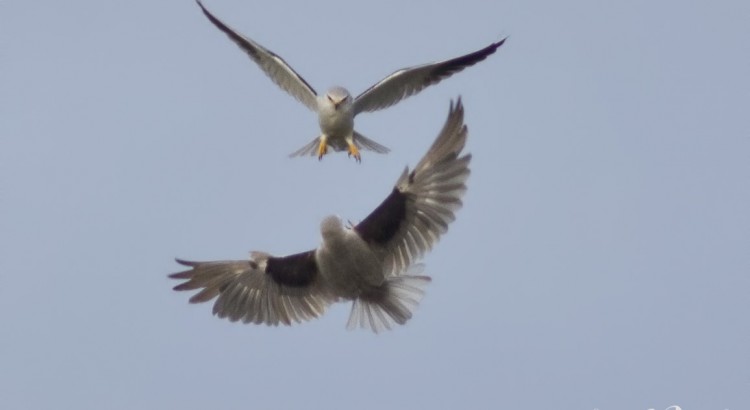 To top off an already busy weekend of birding I decided on Saturday night that I would wake up early, and if weather permitting, head to the Strandfontein Sewage Works and Rondevlei Bird Sanctuary. At around 8:15am I looked at the weather via some webcams in Cape Town and Muizenberg and decided I may as well go through, which is about a 35 minute drive from Somerset West.

I arrived at Rondevlei Bird Sanctuary and headed to the first hide where things seemed pretty dull, onto the second where there were some Spoonbills and Herons, then onto the third and forth hide. On the last hide it was still pretty quiet with the regulars only visible, some Red-Knobbed Coot, Little Grebes, Black Headed and Grey Herons, Gulls and a variety of Cormorants. I waited around in hopes of perhaps catching a Marsh Harrier, but without luck. After about half an hour I left the hide and headed back, I then looked back to scan the skies and I caught a glimpse of a couple of medium sized birds that seemed to be fighting in the air.

Unfortunately it was happening from outside the hide that I had just came from and if I had waited an extra 5 minute I would have been much closer, very familiar story as with the Black Sparrowhawk the previous day. On the way back to the car I also heard a mid-air commotion between a gull and a Black Headed Heron, the herons seemed to possibly have been stealing nesting material. I also encountered a Small Grey Mongoose which was walking on the path.

It was then off to Strandfontein Sewage Works where I had only been one previous time, I figured that the navigation would be easy enough though, boy was I wrong.

First up as I was passing the Zeekoevlei dam I caught sight of a raptor passing over the road ahead and landing in the trees alongside the dam, a look through the viewfinder showed it to be a Black Sparrowhawk, but the branches were obstructing it too much for any decent photograph. Another Black Shouldered Kite was also seen on the side of the road on one of the dead trees. Once in the actual sewage works area I stopped at the first ponds and had a look around at what was mostly a quiet area. Continuing to drive on I noticed some commotion off to the right and stopped my car, I noticed what appeared to be a raptor getting mobbed by gulls, I quickly realized that this was my chance to get some decent shots of a Mash Harrier, it was right next to me at the time I stepped out the car and had only a few seconds to get the lighting settings right (I shoot in manual) and to get my slow 550D auto-focus into action, I managed to come away with some less than ideal, but pretty decent shots of this awesome raptor. While there I encountered a rather friendly what I think is a Zitting Cisticola which was doing some showing off just a couple feet away. I also encountered a single Pied Avocet which was passing by, along with a lifer in the form of a Mallard duck which looked to have possibly been a Yellow-Billed hybrid.

I then moved onto the next pans where I came across a large flock of Greater Flamingos with a number of youngsters. A little further on I stopped by a large active area of aerial feeders which were mainly comprised of Swifts and Martins. Many times have I tried getting shots of these guys in flight and I always struggle, mainly to the Canon 550Ds single center focus point, and while I know a bad worksman blames his tools, I also know that there are limiting factors in hardware. After a lot of failed of failed attempts I managed to get a couple of decent shots here. A few Swift Terns also passed by overhead. A little bit further I also managed to get another lifer in the form of a Black Necked Grebe.

Then began the real ‘adventure’, I followed the roads and somehow ended up on the very skirts of the sanctuary where the road was less than ideal to drive on, scattered with broken bricks and large rocks- on this route I did see another Black Shouldered Kite, South African Shelduck and Marsh Harrier though. I ended up getting completely lost and ended up driving through to where I thought I could exit, only to reach some concrete blocks, I turned around and took another very small hint at a path which resulted in me ending up at another concrete barrier, outside of the security offices. I got out my car and spoke to the security who were kind enough to say that they would drive with me, but not after I dropped my keys into the foot long grass and had to scratch around for them. We then went back and I was shown the right way, and eventually after a long period of treating my Golf 3 as though it was a 4×4, I was once again over the hard concrete road, tar had never felt so good.