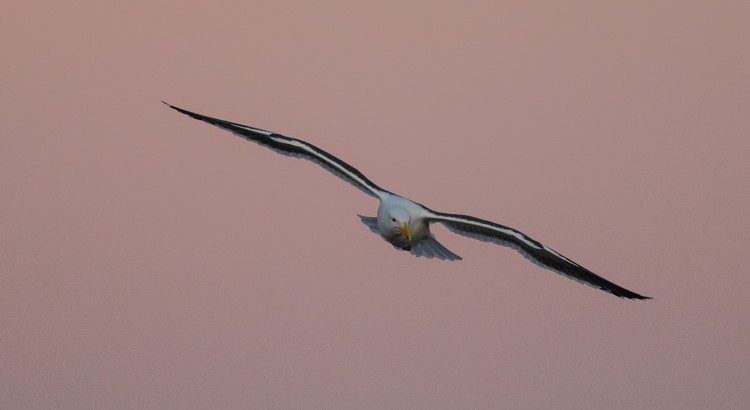 It was Megan’s birthday a couple of months ago and as a gift from her grandparents, they gave her access to their holiday home in Onrus for a weekend. After an initial delay, the time had come for us to venture eastward, for the last weekend of July. I am not a stranger to Onrus and my father used to live there for several years, so I spent time there as a kid, though it had been over a decade since my last visit.

We set off later on Friday afternoon and ended up arriving around 16:30, despite checking every roadside fence pole and tree, there were no signs of raptors, something that would extend through much of our visit. We spent a few minutes unpacking and setting up in the house, which was located just a short walk from Harderbaai on the beach. After unpacking, we headed to a local fish shop (Fish Express, I believe it was) and ordered some calamari and chips, and then headed down to the beach to eat, and see what there was to point my camera at. In summer the area has good tern roosts, but during the winter the sea birds can be less than plentiful. Rough seas the day prior had left a large amount of foam washed up in the shallow areas of the rocks along the road way, as we navigated around the area of coast, spotting several Grey Headed Gulls, Hartlaub’s Gulls and Kelp Gulls. The sunset was lackluster, but we continued to enjoy fairly pleasant weather and a nice change in scenery.

After waking up early, we headed to the Vermont Salt Pan, which was just a few blocks away from where we were staying. The water levels were high from the recent rain and we found ourselves cut off from areas of the path, however we managed to get a few good sightings of several species of waterbird, including Maccoa Duck, Black Necked Grebe, several Cormorants, Gulls, Cape Shoveler and a Common Purple Swamphen.

The skies above saw Martins, as we well as a couple of Swallows present. Black Crowned Night Herons skulked in the reeds near the Flamingo corner, and Warbler’s calls livened up the edges of the pan. I can imagine that during the season changes, one may be lucky enough to find some decent waders here when the water recedes.

The area where we parked was also alive with Weavers building their nests, both Cape Weaver and Southern Masked Weavers darted back and forth constructing their nests. It’s no surprise that the house the tree was on was up for sale though, with the amount of racket they were creating.

After our visit to the Salt Pan, it was on towards Stanford. I had little idea of what to expect, but headed out with an open mind. After quite a little drive, we ended up in the small town of Stanford, and once there I had no clue where to start birding. We first went and stopped by a small river, which much like our journey to Stanford, was quiet in terms of bird life. On route we did however manage to get sighting of a Malachite Sunbird, which was a lifer for Megan – otherwise it was Common Fiscal after Common Fiscal. I spent a lot of time searching the reeds of the river for what I imagined would be an easy Malachite Kingfisher sighting, a bird Megan still wanted to see – though to no avail.

I ventured onto Wortelgat Road, a dirty road that went on for 10 kilometers and despite what appeared to be perfect habitat for birds, we were just unable to see anything. After 8 kilometers of driving, we stopped and got out and walked around. The fields had good amounts of water, where even a few ducks were swimming, but bird life didn’t extend past some Blacksmith Lapwings. An interesting call came from the field and caused me to stop, though only later proved to be a Southern Boubou, with one of their variations.

Our dreams of making it to the end of the road and to the destination of Wortelgat were shattered when we came across a large muddied section of road, from the recent rains which prevented us going any further in my 1997 Golf MkIII. And so we headed back along the dirt hell and back towards Onrus. Again, this entire area looks prime for bird life – but for some reason was just not present on the day, perhaps the season? I still need a Marsh Sandpiper, I imagine summer may have proved good.

After our adventures in Stanford, we made our way towards Hermanus where on route I stopped for a landscape composition I had seen from the road. We only stayed there a few minutes and was soon back on route to the town itself. We decided to stop off by the whale watching areas and see if there were any signs of life in the water, since there seemed to be none of the feathered kind. We eventually found parking and walked to the gathered crowd, who were already watching a mother and her calf swimming close to the shore. We spent a couple hours walking around and enjoying the sights of between 4 and 6 whales, all within fairly close proximity.

I also spent a lot of time scanning every Gull, in the hopes of coming across something other than the usual.

As the afternoon drew to a close, we headed back down towards the beach. And walked along the shore again. And while watching a crazy surfer out in the freezing water, I managed to get a glimpse of a group of African Penguins swimming across the bay, always a nice sight.

We continued our walk, and I caught a glimpse of something familiar. Once you’ve seen a Malachite Kingfisher in flight it’s easy to spot out of one’s peripheral. I called Megan to come quickly and handed her my camera to look through. A single MK was perched on the rocks of one of the tidal pool areas, and was fishing in the still water. We edged our way closer and managed to get fairly close without disturbing him, but not before we flushed a Giant Kingfisher from one of the rocks. Had to laugh at the irony of searching ideal Malachite Kingfisher habitats all morning, 40km away only to have one found just meters from where we were staying, fishing in salt water.

The Tern roosts were very quiet, with only 2 or 3 Swift Terns present and then a few of the common gulls. We also got some White Fronted Plovers and Comorants on the rocks near the shore. Despite being out in the field for most of the day, we had not caught a single glimpse of a raptor, something I am not used to.

Despite the sky being mostly sunny, I also attempted to make the most of it and took a few landscape shots at Onrus Beach.

Later that evening, we got in bed with a hot water bottle, the series Hannibal and enjoyed some amazing Spur take out – a good way to end the day.