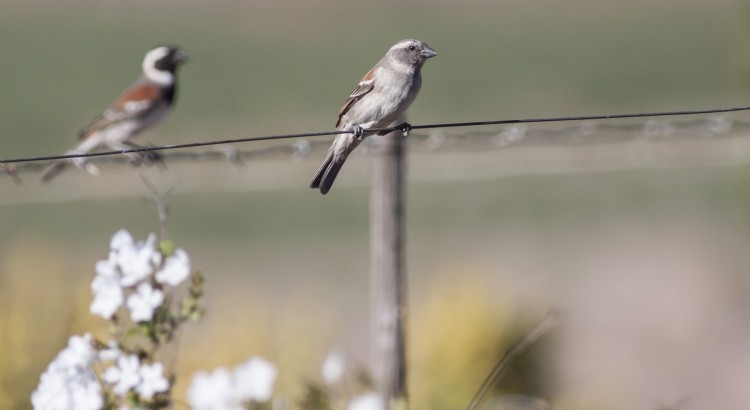 This month the Somerset West Bird Club would be going to – well that depends. Originally the Batis was saying that we would be going to Hillcrest Farm, which I assume was the Hillcrest Farm in Durbanville. However, to my surprise, on the day we were told that we would actually be visiting some farms around Malmesbury. I personally found this a pleasant surprise, aside from the fact that a little research showed that the Hillcrest Farm caters to family picnics and fishing (which in turn tends to result in kids running and screaming about), I also had never gone birding properly out in the Swartland area, so this would be a new territory for me.

We met as we always do, at the parking lot near Waterstone at 06:55 – and just after 07:00 lifts had been arranged and we were on our way. I would be sharing the car with one familiar face, and with two members that I hadn’t really met before, though that would change as the day went on. The turnout was quite good, with nine individuals split between three cars.

The route we would be following would be through Stellenbosch, then onto the R304 and straight through Malmesbury. The farms we would be visiting were about 5 kilometers outside Malmesbury itself. Rose Mills would be our leader for the day, and she had spent quite a bit of time doing some tough recceing of the farm lands before our outing. The farms are private property, but the owners were generous enough to welcome us in to do some birding.

The trip along the R304 saw us get our first sightings of the day: Pied Crows, Black Shouldered Kites, Black Headed Herons and a couple of Jackal Buzzards. After a bathroom stop at the Engine garage in Malmesbury, we were back on the road and within a few minutes we took the turn into the farms.


Upon entering, a Capped Wheatear perched on the fence, though was quick to disappear as we got closer. We navigated through the fields, along the dirt roads and eventually stopped for a bit when we realized that a wrong turn had been taken. We took this time as an opportunity to stretch our legs. While doing so we saw a few Spurwinged Geese and Yellow Bishops. We could also hear the call of the Large Billed Lark coming from the fields. We weren’t here for long though and soon we were once again off, this time in the right direction, guided by a young boy on a motorcycle.

We got to our first destination in a matter of minutes, a small dam that was located just off the road side. We all got out and began scanning the area, some Namaqua Doves were the first birds in sight before reaching the dam, along with the distinct call of a Blue Crane in the vicinity, though we could not get visuals. A scan of the dam reveiled numerous Three-Banded Plovers, a few Black Winged Stilts, Cape Shoveler, Cape Teal and Red-Billed Teal, along with some Red-Knobbed Coots, with juveniles in tow. Spending about 30 minutes around the dam, we also saw several Levaillant’s Cisticolas, Yellow Bishops and White Rumped Swifts; a single overwintering Greater Striped Swallow also put in a brief appearance, which was exciting. On the way back to the car, we had the pleasure of a group of South African Shelduck passing directly over our heads, being very vocal.

A short stop nearby revealed numerous Bishops, both yellow and red. And probably the sighting of the day for me, was a single Red-Billed Quelea that was perched on the fence with the Bishops. Pied Starlings and Common Starlings were also present here.

Moving on we made a few more road side stops as we progressed towards the farm houses where we would be meeting with the owner. Along the way, during our stops we managed to see numerous Red-Capped Larks, with the sounds of the Large Billed Larks still ringing from the field. A stop at the one site showed us Familiar Chat, Bokmakierie as well as a Cape Longclaw. Karoo Scrub Robins were also present here, moving between the small bushes around us. A bird of a bit of debate then pitched up. A raptor came in from a distance and perched on a piece of wood in the distance. I managed to get some barely passable photographs of the bird, but from what I collected, was sure that the bird was an Immature Jackal Buzzard. There was a distinctly darker head on the bird, in contrast to the rest of the body, while when sitting perched, there were hints of darker blotches on the chest area. This combined with some fairly prominently bulging secondary flight feathers made me feel as though the bird must be an Immature Jackal Buzzard. Rose was not yet convinced, and viewing the plumage on the camera LCD wasn’t too easy. Though I still maintain it’s an Immature Jackal, though I’ve been wrong before and will be wrong again. We also saw a large, long legged terrestrial looking bird in the far distance on the horizon, too far to ID – but potentially one of the Secretary Birds that are occasionally seen in the area.

We also came across what appeared to be a Steppe Buzzard, but at this time of the year one has to wonder what species it was. While in summer it’s a fair assumption that most Steppe looking birds, are in fact Steppes, during the winter months, it begs the question of whether it is possibly an overwintering Steppe, or whether it is a Cape Buzzard, that has grown up locally.

We moved on and went to our next destination, a small hill on the farms. On the way to the hill, we came across our first Blue Crane visuals for the day, as three of them stood at the top of one of the field slopes. The hill itself looks like an excellent area for raptor watching, but the area was quiet on the day with only a group of Pied Crows patrolling the sky above. While walking on the path we flushed a group of about 30 to 50 Guinea Fowl from the bushes, and then some Cape Francolin too. Karoo Prinia and Karoo Scrub Robin were also present here.

Rose then took us to the farm where we would be stopping for a break (Spekulasie Farm), though we were then detoured to a nearby farm, Frankie’s. Frankie’s Guesthouse is located a few kilometers from Spekulasie. On the way to the Frankie’s, we came across a lovely Large Billed Lark that was singing on the road side, finally some visuals! However, during our quick observation of the Lark we seemed to have lost the rest of the group as they continued driving in the distance, as they were being lead where to go. We quickly played catch up, but were soon behind again after we stopped to look at a baby Crowned Plover. An extremely cute little bird which ran to its parents soon after we stopped.

We caught up again at the end, essentially meeting the rest of the group at the farm. We were then shown some hospitality, as we were given a short tour of the extremely fancy guest house that they had there, as well as given permission to have a quick bathroom break. With the temperatures around 27’C during the day, and liquids being consumed – the break was definitely needed.

We decided that we would stop here for our lunch break, and found some seating at a nearby tree. As always Rose was kind enough to coheres me into some of the extra food she had brought along. We all sat and talked for a little bit, though the birding was quiet. After we had eaten we walked around a bit, though no signs of anything other than Cape Canaries. I heard the sound of a Buzzard calling in the distance, but no visuals. The group was then shown to the wine cellar by the farm owner, where some members bought a few bottles, seemingly most impressed by the Blue Cranes on the labels – and for those who wanted the blend without the Crane on it – the owner handed them some free extra Blue Crane labels from the label sheet.

It was then back towards the farm we had come from, but not before stopping along the road side to watch a pair of Buzzards circling. There was what appeared to be a Juvenile Jackal Buzzard and then an adult Jackal Buzzard. Though sometimes these young birds have plumages that are so close to another species that it makes it quite a challenge. I’m basing my ID of Jackal Buzzard on the secondary flight feathers, the slightly darker head and the fact that the bird was within close proximity to an adult Jackal Buzzard. We also saw several Brown Throated Martins perched on a wire near the road side while stopped for the Buzzards. A little further along the road we also got to see a young Rock Kestrel perched on the wire above the road side.

It was then on to Spekulasie house we had stopped at, a quaint little house – but at the same time overwhelmingly beautiful. It was here that the group partook in some wine tasting and cheese tasting. We were told how the farms in the area are the most diverse in Africa, farming everything from olives, to cheese, to wine and just about everything else. Since I don’t drink, I took this time to head out into the front of the house and see what I could photograph. It was here that I got some of my favourite shots of the day, Cape Sparrows and House Sparrows fluttered around, with Yellow Canaries also present on the trees and wires. I looked in the Gum Tree outside for signs of the resident Owls, but no sign of them. I then popped back inside, and just in time for some cheese – the mature cheddar was excellent and I was surprised to see that the sales price for the cheese from the farmer was R50 a kilogram, I definitely wouldn’t mind putting in an order for some of that. It was then on to that wine cellar, where I bought my sister a bottle of Rose for her birthday which had just passed.

The time was now around 16:00, making it the longest outing I have ever been on with the club, but also an extremely pleasant and eventful one. As a leader, Rose Mills does an excellent job to accommodate everyone and remain informative. Everyone was singing her praises in the car, and rightfully so. There were no more birds of interest from this point, but we managed to get back safely, after a very successful day. Even though it wasn’t as active as we had hoped, with no sign of the Sparrow-Larks that occur here – we still managed to rack up a list of over 50 species for the day, and I think it’s safe to say that everyone had a great time.