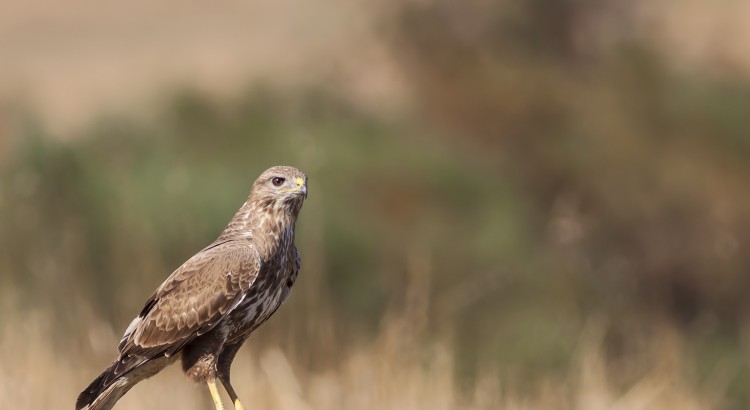 Steppe Buzzards are the most common of raptors for parts of South Africa during the summer months, specifically the Western Cape. Yet somehow my encounters with these creatures had been limited, in actual fact, I had seen more individual Cape Mystery Buzzards than I had Steppe Buzzards. I wanted to encounter the Steppe Buzzard as I had heard about it, as the species that is abundant along fence poles, along the highways that run through areas of veld. A plan was made for an early morning departure from Somerset West, where Cathryn and myself would take a drive through Stellenbosch and towards the Klipheuwel area, keeping an eye open for any interesting species, but most specifically – for the Steppe Buzzard.

While we had woken up at 5:30, we only reached the areas of farmland outside Stellenbosch at around 7:30. Though it wasn’t long at all until we saw the first signs of the much talked about ‘text book’ pose of the Steppe Buzzard. I had spoken to Tertius Gous about the Steppe Buzzards before and he had told me how they tend to sit completely still and accommodating on the fence poles, until you stop your car to take a photograph. The first Steppe we passed was on the other side of the road and I was going to fast to stop, but around 500m further there was another one on the side of the road on the left lane. I began to slow down, and as soon as I was down to 20 km/h, the bastard took off. We continued on and within the next kilometer we had our next target, he too sat still until the car slowed down, then took off to the pole further along… I edged towards him, camera now in hand and hazard lights flashing. Once again he took off, this time flying further down the road and to the opposite side of the road – edging closer again we stopped the car, as several large trucks came passed, rocking us back and forth (as if the focusing out a car window wasn’t difficult enough). We managed to capture a few shots, though I was far from happy with the results.

I had enough of being taunted at that stage and decided to stop and let them come to us, I parked the car in one of the small inlets that are used for farming vehicles to the farmlands that lead directly off the highway. We stood around for a while, I with my Canon 400mm 5.6 L in hand… But after 10 minutes of quiet, I decided I’d make the most out of the beautiful landscapes of farm lands – so I changed the 400mm for my Sigma 10-20mm wide angle. Moving myself down along the fence adjacent to the road, I had only just walked 20 meters from the car when I looked up and to my dismay a Black-Shouldered Kite was hovering perhaps 10 meters above me, directly above the road. He was completely stationary for several seconds, before stooping down into the grass along the road side and catching some prey. I was gutted, all I could do was stand and watch helplessly, my 400mm mere meters from me – knowing that I would likely never get an opportunity handed to me quite that easily again.

While I let the disappointment slowly descend from my conscious, I made the most of the fact that I still had my 10-20mm on, and took some landscape photographs. This is an area which is bright green in late winter, but in later summer – the grounds are dry and yellow – both offer their own ‘moods’ though. At this point, Cathryn was also darting between each side of the road, the left, then the right – then the center of it, trying to get some interesting shots.

We proceeded onwards towards Klipheuwel, we reached the intersection which leads to Malmesbury Road, and my intention was to take a right – but wait… In the distance on the left, a large raptor was circling over the field just next to the road. I switched my flickers and quickly motored to the left, turning on hazards and pulling off to the side of the road. I quickly pulled my camera from my lap and focused it to the sky across the road. Nothing too special, a Yellow Billed Kite… But it was in perfect lighting conditions and was obliging very nicely by circling low. It then disappeared into the distance…

We made a turn in the northerly direction where we had originally planned to head, and stopped off at another inlet/drive-way area on the road. Here I chased around some LBJs, to try and get some shots of them… Pipits, mainly Pipits – I think they were Pipits… While my ID abilities grow a bit more each day, I have avoided the Pipits and Larks like the plague – their similarities are intimidating. But I will have to give some real attention to them soon.

Another Steppe Buzzard flew overhead and then perched in a large dead tree in the middle of a field, a tree that was already hosting what looked to be another Steppe Buzzard. Cathryn and I stuck around here for a while, but then eventually moved on. Mere meters from where we were parked, on the left side of the road we caught a glimpse of a perched flock of, a flock of something… Cathryn was quick enough to get a photograph, but with a dying Sigma 70-300mm lens, the image was still difficult to use for identification. On the same lines though, on the post – was another Steppe Buzzard. We fired off a few shots, but he was quick to move along the wires down the road whenever we approached. I quickly caught a glimpse of something unusual on the wire, on the opposite side of the road while driving… ‘Whoa whoa whoa, what was that?’, I asked.

I reversed back and looked out the window to a new sight. A bird I had not seen before, a lifer. I quickly got some shots, though my brain was not syncing the imagery with a name just yet – but I knew I had seen it in my field guide. A few minutes later, I cautiously questioned… “Was that a Namaqua Dove?”. This uncertain certainty continued through the drive, the more time went by the more convinced I was on the ID. The Namaqua Dove is by no means rare, but far less common than some of the other Dove/Pigeon species, and I was just happy to get a new tick (ID was confirmed once we got home).

On the drive back home, we encountered another couple of Yellow Billed Kites which were circling above the road. I stopped the car to try get some shots of the two interacting, but they disappeared in a few seconds.

Then finally… I saw a Steppe Buzzard and stopped the car, and the little bugger actually stayed still. I had the time to compose the shot, get the focus right and take a few shots before he flew off again. Though I was very happy with the results, finally a Steppe Buzzard that was perched, still and obliging – furthermore, it ended up being one of the sharpest images I have taken. This was also the last Steppe Buzzard we saw for the day. The last bird for the day was a Jackal Buzzard, posted up on one of the telephone poles, he offered a nice flight shot, but my autofocus had other ideas.

3 thoughts to “The Search for Steppe Buzzards”