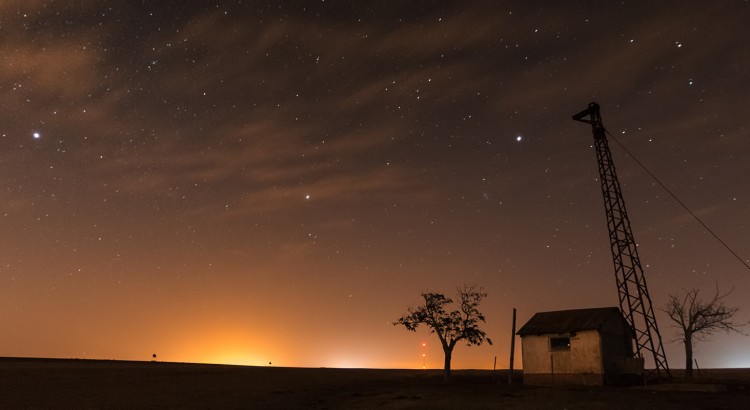 After shooting on my Canon 50D for nearly 4 years, I decided it was time for an upgrade and ordered a 70D. Due to my interests in both landscape photography as well as birding, it was the perfect camera for the budget that I had and aligned well with my needs. The 70D is the successor of the Canon 60D, which was released after the 50D that I am used to shooting. Apart from an increased performance in auto-focus, the addition of video and the higher image quality, the 70D also offers superior noise handling, especially at higher ISO than the 50D did. I wanted to see exactly how well the Canon 70D handles ISO values of around 1600 and on in low light conditions and I have to say, so far I’ve been really impressed for a crop sensor body. I began my night sky tests a week or so ago when I opened up Stellarium and saw that the moon rise was set to occur quite some time after the rise of the milky way which would allow better opportunities to capture said Milky Way. The conditions were good with no cloud, almost no wind and warm weather – not bad for autumn! I hopped in my car at around 21:00 and started my drive in an attempt to escape the light pollution in the area. I stopped at Kogelbaai originally and tried to capture some shots there, but there was still a lot of light pollution coming from the nearby towns of Gordon’s Bay and even from Cape Town.

I continued driving, past Rooi Els and eventually to a small road opposite Pringle Bay. It was there that I noticed the milky way to the south, contrasting with the dark night sky. With the moon still far from rising the air was dark, and it was difficult to see one foot in front of me. I managed to capture a few shots I was happy with, but I was craving a better foreground composition and decided to extend my drive a few more kilometers towards Betty’s Bay. Stoney Point has been a lovely location to shoot in the day, but I have wanted to see what it would be like under moonlight. Of course, moon light was something there was not this night, however I managed to navigated the parking lot towards the harbour wall by following the sounds of the penguins. It was a little weird to be standing in a completely dark and abandoned area with only the sounds of crashing waves and the sounds of Jackass (African) Penguins surrounding me. I used the flashlight on my phone to paint some light into some of the scenes in order to provide some foreground matter.

About a week after my initial night shoot, Megan and myself were eyeing a certain location, but due to some high level cloud we decided we wouldn’t take on the hours of driving with the possibility of the cloud cover interfering with the sky. Instead we headed in the opposite direction where conditions were much as expected. There was considerable light pollution from suburbs within the 20km range and a lack of mountains meant it spilled into our sky. We stopped along a dark and quiet farm road where a series of turbines stood under the few visible stars. We spent some time here trying to get our compositions right. The problem with long exposures is that each mistake in composition loses you quite a bit of time.

The most recent of my night time adventures was earlier this evening when thanks to load shedding from 20:00 until 22:30, I decided to try do something instead of being bored in my room.

I had emailed someone at Paardevlei a week before and enquired about access after dark. Though a little vague, it would seem that a part of the area is open at night while other parts are restricted. Conditions were not great with light pollution heavy from Cape Town and generators powering on site flood lights adding extra light to the images. However I did what I could under the circumstances. I can’t wait to experiment more with the 70D and night time photography in the months to come.