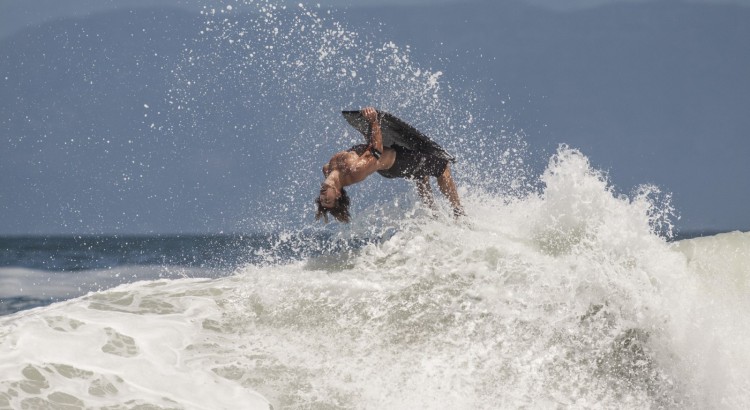 In December last year I decided I was going to take up a hobby that was a lifestyle for me when I was younger, namely bodyboarding. I have a lot of memories attached to being behind a board in the waves, throughout all seasons and all weather conditions. The idea that man was meant to spend most of his days in the ocean was something that was instilled in me at a young age by my grandfather, who was a surfer turned bodyboarder himself. Anyway, I recently decided after years of procrastination that I needed to just go ahead, buy a board and get back into the water. It’s worth mentioning that I never once swam in the ocean from 2004 to 2009, nor from 2009 to 2013, so the ocean was very foreign to me now, but somehow I still felt its calling.

I went down to the local surf shop and picked up a Stealth board, I hadn’t even heard of Stealth… Last time I was riding it was all about Morey and Custom X. Either way, I snatched it up for a grand as it was lime green and there’s no lime green object that is escaping me. I also bought a pair of Reef fins, which I planned to later upgrade but was strapped for cash at the time. So you could say that I’ve been bodyboarding again for about a month and a half.

After already feeling comfortable in the waters of Strand, which isn’t difficult given that it’s a shallow beach break that generally sits at 2-3 foot on decent days, I decided it was time to do something I could never do as a youngster and go check out some of the other surfing locations. First up on the cards was Caves or Koeelbay, a beach I’d heard a lot about and also one that is located only 30km from where I stay.

It was set, we’d be heading though to Koeelbay on the 19th January to see what surfing some real break is like. We got there early, parking first next to the shark spotters tower before the main parking area. We got out the car and looked down the cliff face at the surfers carving along some pretty mean swell. Our hearts started pumping and we began to get really amped on riding what looked to be a sick session.

After parking, and taking the therapeutic trail down to the beach, our feet touched sand as we stared into what can only be described as paradise. Cliff faces that tower above you, clean white sands and the bluest of oceans. Almost reminiscent of Llandudno, except that there are no upper class houses distorting your horizon, just ocean and mountains.

I was just as eager to shoot some surfing as I was to get in the water, so I spent a couple of hours capturing some of the scenes the other riders were creating. There was some serious skill in the water, with both surfers and bodyboarders. ARS, backflips, 360s and massive rolls – suddenly I was feeling a little intimidated.

I watched as my sister’s fiance, Will went in first with his surf board. I decided to see how he handles the rough seas. From shore it’s always hard to gauge just how big a wave is, but I only needed to see him duck diving a monster to know that the surf was cranking. Waves looked to be a good 4-6 foot with a few 6 to 8 foot monsters occasionally. I’d never surfed above 4-5 foot before, and I am definitely not as fit as I used to be. None the less though, after my camera equipment was thrown back in the car, I strapped up the leash and took the jump into the waters. Waters that were surprisingly warm too. Koeelbay is a beach break that breaks best at low and only requires about 50 meters of paddling to get to the main break. But they can feel like the furthest 50 meters of your life (as I found out a few weeks later), this time however I was lucky and managed to paddle out between sets and didn’t have to duck under any monsters. I quickly went out to a point where I knew I could get over any wave, while I caught my breath. After 5 minutes or so, it was time to try my hand at some real power. The first wave I took was a beast, probably around 6 foot and my heart sank as I carved at the bottom and felt dwarfed when I looked up. I was quick to seek shelter in the barrel, and maybe got 2 seconds of barrel time before I heard that sound of crushing behind me and pulled out of the barrel. At this point I was now in the white wash and wondering how do you bail out of a wave this size? I pulled in, and hoped to come out the other side but was sucked down by the power of the wave, where I spent a good while contemplating the meaning of life and if mine was about to end. I was then released and managed to get up for a breath, but only for a second before the next wave came over and ripped me down again.

After being let up again, now exhausted and slightly paranoid, I decided I wasn’t going to give up, despite how unfit. I went out for another wave, duck diving a few waves that made me feel as if I could bury myself under the sand and it’d still grab me. I was eventually out at the back again and out of breath. Waited for another good right, and managed to catch a wave that had a wedge-like break, that took me nearly to shore. No way in hell was I trying to get out there again in a hurry. I loved the power, and the size is awesome. But I still feel like I need at least another year back in the water before I’ll be able to throw the same kind of moves I do on smaller waves – or at least wait for my broken ribs to heal before I go throwing a roll on a 6 footer.

A friend had lent me his GoPro to borrow though and I wanted to take it in the water to see what I could get, so after dumping my bodyboard back on shore I hooked up the GoPro to a fin-saver and went in. It’s rather difficult trying to not get destroyed and handle a GoPro at the same time. And I didn’t get too many shots I was happy with, but it’s definitely something I want to try again.

While out we were hit by a monster set with a period of maybe 8 seconds, soon as you think you’ve made it BOOM, another monster crashing right on your head. But alas, we managed to survive the onslaught and ended the day with most of our health intact. And furthermore I managed to grab some pretty cool shots of some of the other riders. It’s my goal to reach a point where by the end of the year (2014) I am able to take on Koeelbay and throw a few rolls and backflips of my own.