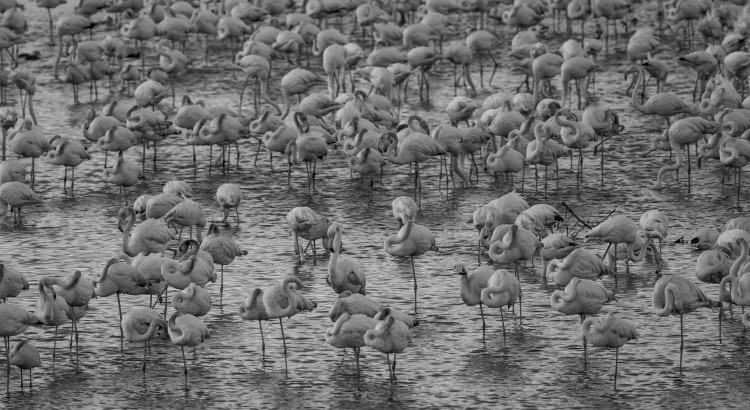 It was once again time for the monthly Somerset West Bird Club outing, and the weather was not looking kind at first light. The forecast wasn’t great and I wasn’t expecting much, and having woken up with a sore ankle, I was weighing whether I should go or not. At 7:40 I contacted Rose Mills who was leading the outing and asked where they were headed to first, since I had missed the original meeting time, but in the end decided to stick it out and make the effort.

I met them at the Macassar Sewage Works (oh yes, today we would be visiting a few local areas), where they were just looking down from the one bridge, as you enter. Despite driving through constant rain to get to the location, when I arrived the sky was cloudy but without rain. A few seconds after arriving we caught a short glimpse of what appeared to be a Black Sparrowhawk passing overhead, but with light being terrible we only had silhouette to go on. I had never been to Macassar Sewage Works before, but had always heard pretty promising things. Shortly after arriving we stopped at the first area of water where we were lucky enough to see about 5 White-Faced Ducks. These birds always used to be a tough tick down here, but recently there seems to have been an expansion of their range, or a denser population. It was also here where I managed to pick up a lifer for the day; despite often hearing the Little Rush Warblers, I had yet to see one – but got several visuals on them as they popped up from the reeds for a few fractions of a second before descending into them once more. We also saw a Mallard, which looked more likely to be an escapee than a hybrid. A few Lesser Flamingos passed by over the horizon; another bird that is currently far more prevalent than is used to.

We then progressed to the pans, where we saw hundreds of Red-Knobbed Coots, Hartlubs Gulls, some Southern Pochard, Cattle Egrets and some other common birds. There were also one or two Black Necked Grebes present. Brown Throated Martins occasionally flew by and just touched the water’s surface. We then moved on further down towards the estuary, where we were immediately amazed by the mass of Flamingos present. Both Lesser and Greater Flamingos’ presence have been on the rise this year in the Cape, and it is thought to be an increase in food source which has brought them. None the less, we were staring at probably close to 100 birds, mostly Greater, but with a few Lesser also present.

The sun then appeared out of nowhere and gave us an hour of brilliant light. We got to observe a mass of Black Winged Stilts; in fact I had never seen so many in a single location and they seemed to erupt form nowhere as they took to the skies. We also watched as a couple of Spoonbills filtered through the shallow waters for food (and were quick successful). A few Pied Avocets were seen along the estuary, along with a Little Egret and a single African Black Oystercatcher. There were a mass of common sea birds, such as Kelp Gulls and Cape Cormorants.

The moment of the day was definitely when a Pied Kingfisher began fishing just in front of us, hovering just above our eye level – darting down occasionally and also proving very successful in his fishing. A few minutes later his mate was also seen, as the two of them fished in the shallows together, occasionally perching to eat their catches.

Just before our departure from the estuary we also saw a Caspian Tern and Swift Tern. We then went back for another look around the pans, but apart from some Weavers and a Yellow Canary, there wasn’t much going on. We also saw a distant Jackal Buzzard perched on a pole. It was soon time to leave Macassar, but not before one short stop on the way out – where we encountered an Immature Jackal Buzzard.

It was then off to Vergenoegd, a small wine estate located quite close to where we were, just off the N2 highway. The location is not unfamiliar and we, as a club, had gone birding here last year. Though this time was a bit different because the farm has now put up bird hides to encourage birders to enjoy the surroundings. The location consists of a single dam for waterbirds. At this damn, we encountered a Purple Heron on arrival, as well as several Flamingos.

We spent some time in the one hide, before moving around and seeing what else was there. We saw several Fork-Tailed Drongos, Cape Wagtail, Malachite Sunbird and some House Sparrows. But the rain was quick to come down again and we found ourselves leaving shortly after, to find warmth and dryness. The plan was then to head to the Helderberg Nature Reserve, but after arriving at the Nature Reserve, it was raining and hardly birding weather – with the others seemingly having decided the same, I turned around and headed home for the day.

The next day, after the bird club outing – I did a bit of solo birding, heading to Paardevlei in the Strand. I arrived in the morning and saw that the dam was still being inhabited by a number of Lesser and Greater Flamingos, a lovely sight. The dam now looking healthy, and full of water. Mere minutes after arriving I was treated by a great display of the resident Rock Kestrel, which perched on a wire above the path. Martins were plentiful, as well as one or two Swifts. A female Pin-Tailed Whydah showed itself for a bit on top of a phone wire.

On the dam there were Black Necked Grebes, Southern Pochard, Cape Teal, Little Grebe and many more. While along the banks there were Common Waxbill, Cisticolas and Weavers.

I then spent some time looking at the ground, as opposed to the sky, as I tried my hand at some macro photography, using a standard Canon 50mm 1.8 lens with budget extension tubes.

On the way to my car, this Pipit hopped up onto the bench and watched as I passed by. From the looks of it, I reckon it’s likely an African Pipit, but I wouldn’t rule out a Plain Backed Pipit either – these LBJs are difficult!

None the less, it was an eventful weekend of birding. No major rarities to speak of, but some enjoyable times and nice weather on the Sunday.