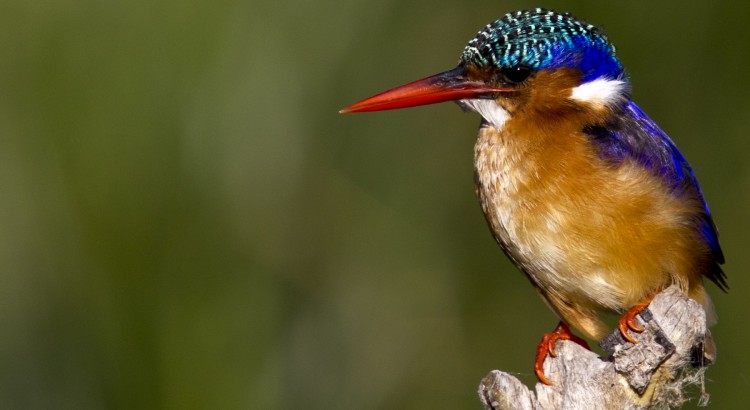 After having seen Intaka mentioned all over my facebook’s newsfeed for a couple of months, and having been told about it in one of the Rondevlei hides – I decided that I would actually do some research and see what the Intaka Island Wetlands was. After a quick google, I came to the Intaka Island website and was shocked that something so amazing existed right next to the Century City shopping center. I quickly made a point to visit the area as soon as possible and organized with my girlfriend for an early wake-up on the following Sunday morning (March 25).

We arrived at Intaka at around 9am and paid the small entrance fee, where after we headed for the wetlands, which was located directly outside the door. The reserve is by no means large, and comfortable paths and a wooden walkway makes for easy mobility. The first sightings occurred directly after entering, where several Red-Knobbed Coots and Common Moorhen where bobbing around. It wasn’t long before a Reed Warbler and Laughing Dove were spotted, followed by some Yellow-billed Ducks, some Sacred Ibis and fly-byes from mainly Hartlaub’s Gulls. While still at the first pond, I decided to wait and bit and see if anything was going to show from within the reeds when a shadow was cast over me, a Purple Heron was coming in for a landing and was in just the right position for the early morning light to provide ideal lighting on the bird, I was quick to grab some shots which were by far the best shots I’ve gotten of the Purple Heron.

We then moved on to the next pond there was an abundance of Red-Knobbed Coots and Common Moorhens, with several Comorants as well, primarily Reed Cormorants and White-Breasted Cormorants, while along the path a Levaillant’s Cisticola popped up next to us. There were also several Cape Weavers passing by over the path way.

We then proceeded to where the main attraction was, the hides by the Kingfisher perches. These hides were already full and getting seating inside was not an easy task, it was clear that this is definitely a popular destination for birders, as everyone tried to get the best possible shot of the Malachite Kingfisher who was showing well, busy feeding from the perches. On another perch in the background a Pied Kingfisher was only a supporting actor in the show. Another Purple Heron then joined the party along with the resident Glossy Ibis. A Cape Wagtail soon found the Malachite’s perch a good place to vocalize itself from.

After getting some decent shots of the birds above, we headed back to the car. But I was craving more. My girlfriend, while beginning to see some of the appeal in birding, is very much still unconvinced, but does have an obsession with Flamingos, so I decided we should take the short drive from Intaka to the Rietvlei hides nearby.

We arrived at Rietvlei and after exiting the car we came across a young Grey Heron which seemed quite shy,
insisting of flying off 10 meters each time we took a few steps. Some Little Egrets were also seen on the water side, as well as some gulls passing over head. A single male Cape Sparrow also made his presence felt. We headed to the hides themselves, but there was absolutely no activity in the water in front of them. A number of Greater Pelicans were seen flying over though during this time, but unfortunately nothing too special and no Flamingos.

I will probably go back to Rietvlei in the winter when there is more of a chance of some interesting sea birds, while I plan to visit Intaka again very soon.